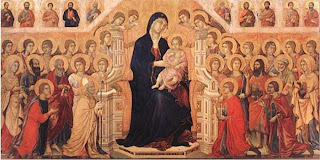 “To be said or sung, kneeling, standing, or in procession; before the Eucharist or after the Collects of Morning or Evening Prayer; or separately; especially in Lent and on Rogation days.”

The rubrics (ceremonial directions) of the Prayer Book often tell us important things. Those printed at the head of the Litany tell us something of its history and usage in the Church. First, the Litany’s early and normative way of being offered was for it to be sung in procession. Litanies have a certain character of prayer; the fixed or only occasionally-changing response means the participants may enter into a rhythmic relationship with them, rather like the rocking of a child or a person in deep emotional need. Litanies have this very ancient, physical dimension that invites the whole person – body, mind, soul – into God’s presence and power. Experiencing the sung Litany in procession at a parish church or cathedral (especially on a Rogation procession) reveals this unifying characteristic.

The rubic also makes provision for saying the Great Litany standing or kneeling. This is certainly the most common form of using the Litany in the post-reformation Anglican Church, used both liturgically and in personal prayer.

The use of the Litany has varied over the years. Currently it is used as a prelude to the Eucharist (rather like the Great Litany of the Eastern Orthodox churches), seamlessly moving from intercession on behalf of the world before God into the Collect of the Day. In addition to being used after the collects at Morning or Evening Prayer, the rubric notes that the Litany may be used as a separate devotion. It is precisely this aspect which has fallen out of use and which I would submit the Church must recover.

It was once a common devotion among us to offer the Great Litany at noonday, especially on Wednesdays and Fridays, and daily during Lent, the quarterly Embertides, and Rogationtide. Thus, there was a time when people either as a community or in personal prayer would regularly offer this prolonged form of supplication and intercession. It was part of our DNA to intercede in a broad and intentional way for the world well outside the confines of the Sunday liturgies. By doing this, a community is raised from self-consciousness and self-obsession to its true priestly function of offering the world to Christ the Great High Priest.

When the Church regains its proper sense of purpose as the uniquely-called (and uniquely humble!) people of God, the meaning and value of such prayers as the Litany will once again be clear.

Posted by Brandon Filbert at 9:24 PM

Email ThisBlogThis!Share to TwitterShare to FacebookShare to Pinterest
Labels: Reflections on the Great Litany