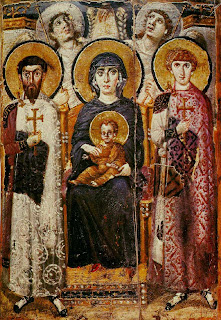 The angel said to her, ‘Do not be afraid, Mary, for you have found favour with God. And now, you will conceive in your womb and bear a son, and you will name him Jesus. He will be great, and will be called the Son of the Most High, and the Lord God will give to him the throne of his ancestor David. He will reign over the house of Jacob for ever, and of his kingdom there will be no end.’ –Luke 1: 30-33

The Mystery of Humanity’s Reconciliation with God
From a letter by Saint Leo the Great, Bishop of Rome

Lowliness is assured by majesty, weakness by power, mortality by eternity. To pay the debt of our sinful state, a nature that was incapable of suffering was joined to one that could suffer. Thus, in keeping with the healing that we needed, one and the same mediator between God and men, the man Jesus Christ, was able to die in one nature, and unable to die in the other.

He who is true God was therefore born in the complete and perfect nature of a true man, whole in his own nature, whole in ours. By our nature we mean what the Creator had fashioned in us from the beginning, and took to himself in order to restore it.

For in the Savior there was no trace of what the deceiver introduced and man, being misled, allowed to enter. It does not follow that because he submitted to sharing in our human weakness he therefore shared in our sins.

He was born in a new condition, for, invisible in his own nature, he became visible in ours. Beyond our grasp, he chose to come within our grasp. Existing before time began, he began to exist at a moment in time. Lord of the universe, he hid his infinite glory and took the nature of a servant. Incapable of suffering as God, he did not refuse to be a man, capable of suffering. Immortal, he chose to be subject to the laws of death.

He who is true God is also true man. There is no falsehood in this unity as long as the lowliness of man and the preeminence of God coexist in mutual relationship.

More on this Feast…

The Feast of the Annunciation marks the beginning of the Incarnation cycle in the Liturgical Year. It is a Feast of Our Lord in the Episcopal Church, and is so significant that it largely supercedes our observance of Lent when it falls during this season. Indeed, one traditional food for this day is waffles!

The Annunciation always makes us keenly aware of the centrality of Incarnation in Christianity, and how worthy is the Theotokos of veneration. Not only is it through her that God was able to take our flesh and thus redeem us "from inside," but her example of offering our will and our very self to God makes clear the centrality of created matter to God's ongoing work.

Too often in American Christianity we get the message that faith is a purely “spiritual” thing, without any material basis or impact. This helps feed the ludicrous “faith v. science” feud. It also reduces our faith to something approaching an intellectual proposition, rather than a robust experience of God’s active and reconciling presence in the world. Orthodox Christianity cannot co-exist with this rejection of Creation's true meaning and purpose.

The Annunciation proclaims joyfully that God chooses created matter to redeem the Creation, and that the Creation’s true purpose is to be alight with the glory and presence of the Lord. The utter holiness of redeemed Creation is a central message of even that much-misused book of Revelation. The process is “set in motion” by the Annunciation.

Let us glorify our God and venerate the God-Bearer Mary. Let us also emulate her example by offering ourselves to God, that redeeming grace may be manifested to those around us and the hearts of those who do not know God may be illuminated by his loving work in and through us.

Collect of the Annunciation:
Pour your grace into our hearts, O Lord, that we who have known the incarnation of your Son Jesus Christ, announced by an angel to the Virgin Mary, may by his cross and passion be brought to the glory of his resurrection; who lives and reigns with you, in the unity of the Holy Spirit, one God, now and for ever  Amen.
Posted by Brandon Filbert at 9:06 PM