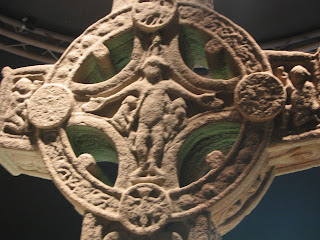 A Meditation on the Passion
(For Good Friday, and for Friday devotions through the year)
In this meditation, Bishop Lancelot Andrewes combined all of the accounts of Christ’s Passion into one simple overview. It invites us to contemplate the mystery of God’s love for us in Christ and the depths to which he went to embrace us and raise us to glory.
To use this meditation, go through each line slowly, recounting the event as describe in Scripture and picturing it mentally. Reflect on how this part of the Passion speaks to you, and how it is experienced in the lives of others—for Christ’s Passion raises to consciousness the suffering of others. Offer what arises in the heart to God.
This meditation does not end with Christ’s death: it continues to the Second Coming. This reminds us that the Crucifixion we recall on Good Friday (and all Fridays) may never be understood in isolation from the rest of the Paschal Mystery and the story of salvation. If it is, we will likely see only the sorrows of the Cross rather than its power and hope. Remember: we may not weep for Christ on the Cross—it was his purpose and desire to go there. Rather, we may (and must) weep for the sins that put him there.
Only when it is understood as part of the mystery of redemption may we see the Cross as Christ saw it: not only an instrument of shameful death, but his glorious throne whereon God’s victory over sin and death would be won, and the means of eternal life for all marked with it in baptism.
Praise, Blessing, and Thanksgiving
For the death of Christ,
In his obedience unto the death of the cross:
For the things which he suffered,
In his being pressed on every side:
In Gethsemane, Gabbatha, Golgotha – the pains, pangs, the shame, the curse of the cross
That he willed
1  To be betrayed by his own disciple
2  Sold for 30 pieces of silver
1  vexed in soul
2  very weary
3  full of anguish
4  exceedingly sorrowful, to death
5  in agony
6  to utter a loud cry and shed tears
7  sweat blood like dew on the earth
that
1  his disciples should fall asleep; to be betrayed by a kiss
2  that his disciples should flee; to be left alone
3  denied by a strong oath, and by a curse
4  subjected to the powers of darkness
1  seized by hands
2  arrested as a robber
3  tied up
4  dragged off to
1    Annas
2    Caiaphas
3    Pilate
4    Herod
5    Pilate again
6    the Praetorium
7    Gabbatha
8    handed over
9    Golgotha
10  Cross
1  Annas and Caiaphas
2  Accusation
3  False witness
4  Condemned of blasphemy
1  derided in many ways, insulted by servants
2  beaten up
3  slaps of the hand
4  blindfolded
5  beaten
6  spat at
7  jeered at
8  blasphemed
Pilate
1  accused of sedition
2  to be denied at the end
3  to be replaced with Barabbas
4  to be hounded to the cross by the will of the crowd
Herod
1  dressed him in a gorgeous robe
2  treated him with contempt; sent him back to Pilate
1    renewed demands for his death
2    to a very shameful death
3    handed over to the will of the soldiers
4    dressed in scarlet
5    a stick for a scepter
6    a crown of thorns
7    falling on their knees they jeered
8    they called him king in derision
9    they spat on his face
10  beat him about the head
1  to a pillar
2  beaten with sticks
scourged
a baptism of blood
bruises
wounds
Behold the Man! (a grievous sight)
Away!  Crucify!
His blood be on us
sentence of death
to be loaded with the cross
to sink
to be given myrrh to drink
stripped – the shame, the grief
stretched on the cross
fixed with nails
hands and feet pierced
set in between thieves
and one of them repenting
to be mocked by the passers-by
to be blasphemed by one of the thieves
My God, my God
to be derided when he called upon God
to be given vinegar to drink
to bow his head
to give up his spirit
to have his side pierced with a spear
when dead to be called a deceiver
Father forgive
Mother, behold you son
Today with me
My God, my God
I thirst
It is finished
Father, into your hands
1  the precious death
2  the opening of the side
3  blood and water
4  the begging of the body
5  the taking down from the cross
6 the burial in another’s grave
7 for three days
1  triumph over cosmic powers
2  mighty resurrection
Appearance to Magdalene
to the women
to Peter
to those going towards Emmaus
to the ten without Thomas
to the eleven with Thomas
at the sea of Tiberias
to James
to the five hundred
(Transfiguration recalled and understood)
3  the glorious Ascension
4  seated at the right hand
5  distribution of gifts
6  standing up at our behalf as advocate, as priest
7  the turning to bless for the second time
8  the judging of the living and the dead
(Translated by David Scott)
Posted by Brandon Filbert at 8:18 AM