A Friday in Eastertide 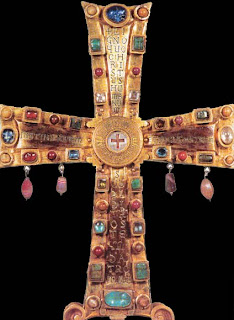 During much of the year, Fridays are set aside in the Church for fasting, prayer, and other acts of self-discipline in honor of Christ’s sacrifice on the Cross. During Eastertide, however, this discipline is itself set aside as part of the great fifty day celebration of the Resurrection.
Friday never loses its association with the Cross, however. Our response to the mystery of salvation differs during Eastertide, but it is not undermined or diminished. The collects associated with Fridays during Eastertide all connect with the Cross, but highlight it as viewed through the lens of the Resurrection. This “unitive” understanding of the Paschal Mystery is especially sharp during Easter, but it is true throughout the Liturgical Year, for no part of this journey can be understood if it is cut off from the whole fabric of the story of salvation.
Below is a portion of an Eastertide sermon by St. Ephrem of Edessa [obit. 373, commemorated on June 10]. He was one of the greatest preachers and hymn writers of the early Church, as well as being a deacon and organizer of relief work. This sermon shows St. Ephrem engaging most profoundly with the significance of the Cross, rich in creative imagery, while at the same time connecting the Paschal Mystery with the rest of Christ’s life and salvation history as a whole. This small selection gives the reader some idea of this great saint’s extraordinary mind and theology, bringing some of the glory of Syrian Christianity (one of the great centers of early Christian thinking and practice) to our modern American ears. Come: Let us glory in the Cross of our Resurrected Lord!

Death trampled our Lord underfoot, but he in his turn treated death as a highroad for his own feet. He submitted to it, enduring it willingly, because by this means he would be able to destroy death in spite of itself. Death had its own way when our Lord went out from Jerusalem carrying his cross; but when by a loud cry from that cross he summoned the dead from the underworld, death was powerless to prevent it.
Death slew him by means of the body which he had assumed, but that same body proved to be the weapon with which he conquered death. Concealed beneath the cloak of his manhood, his godhead engaged death in combat; but in slaying our Lord, death itself was slain. It was able to kill natural human life, but was itself killed by the life that is above the nature of man.
Death could not devour our Lord unless he possessed a body, neither could hell swallow him up unless he bore our flesh; and so he came in search of a chariot in which to ride to the underworld. This chariot was the body which he received from the Virgin; in it he invaded death’s fortress, broke open its strong-room and scattered all its treasure.
At length he came upon Eve, the mother of all the living. She was that vineyard whose enclosure her own hands had enabled death to violate, so that she could taste its fruit; thus the mother of all the living became the source of death for every living creature. But in her stead Mary grew up, a new vine in place of the old. Christ, the new life, dwelt within her. When death, with its customary impudence, came foraging for her mortal fruit, it encountered its own destruction in the hidden life that fruit contained. All unsuspecting, it swallowed him up, and in so doing released life itself and set free a multitude of men.
He who was also the carpenter’s glorious son set up his cross above death’s all-consuming jaws, and led the human race into the dwelling place of life. Since a tree had brought about the downfall of mankind, it was upon a tree that mankind crossed over to the realm of life. Bitter was the branch that had once been grafted upon that ancient tree, but sweet the young shoot that has now been grafted in, the shoot in which we are meant to recognise the Lord whom no creature can resist.
We give glory to you, Lord, who raised up your cross to span the jaws of death like a bridge by which souls might pass from the region of the dead to the land of the living. We give glory to you who put on the body of a single mortal man and made it the source of life for every other mortal man. You are incontestably alive. Your murderers sowed your living body in the earth as farmers sow grain, but it sprang up and yielded an abundant harvest of men raised from the dead.
Come then, my brothers and sisters, let us offer our Lord the great and all-embracing sacrifice of our love, pouring out our treasury of hymns and prayers before him who offered his cross in sacrifice to God for the enrichment of us all.
Posted by Brandon Filbert at 7:08 PM

Email ThisBlogThis!Share to TwitterShare to FacebookShare to Pinterest
Labels: Friday Devotion, Through the Church Year