A Glaring Omission in the Episcopal Calendar: The Beheading of St. John the Baptist 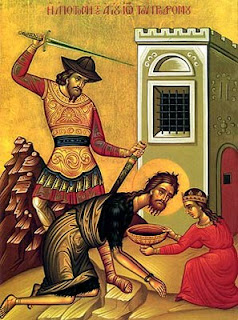 Yesterday was the commemoration of the Beheading of St. John the Baptist, but one would labor in vain to find this day listed in the Episcopal Church’s sanctoral calendar…even in the ludicrously inflated list of commemorations in “Holy Women, Holy Men.” This ancient and significant day goes unnoticed by our portion of the Church.

This is very odd.

First, the event of the Forerunner’s martyrdom figures prominently in the Gospel—as does so much of his life. Second, the commemoration has a very long history in the Church; in fact, it is one of the earliest commemorations of a saint’s martyrdom in the liturgical year. Third, the death of the Forerunner points out something very powerful about the Christian’s vocation.

St. John’s martyrdom, hidden from public view and the result of a drunken boast, expresses well the fact that a deep devotion to the God’s truth and justice will make us enemies of the world. The cost of living a life of transparency to Christ (“He must increase, I must decrease…”) is a complete openness to where that devotion will take us. This is not for the faint of heart. Countless of our brothers and sisters in Christ know what this means today; for them, it is not history—it is present reality.

In a church which professes all sorts of devotion to “prophetic ministry,” where "the disenfranchised" are supposed to "speak truth to power," why do we not commemorate the Baptist’s death? Are we uncomfortable with its claim on our lives? Do we see how much less our suffering for the Gospel amounts to? Are we uncomfortable with St. John’s death over the effects of sexual sin now that we have largely eradicated the concept? It is hard to explain—especially since the Church of England has long (since the 1662 BCP) had it as part of the calendar. Perhaps we rather feel sorry for Herod, that his cocktail party went so awry just when everyone was having a good time....

In a sense, John is the first martyr of the Faith. Not to commemorate it seems utterly senseless in an era where just about any Episcopalian who ever made the news seems to get a day in the calendar. My prayer is that, following the lead of the Church of England and a number of other sister churches in our Communion, we will put this wrong to right soon.

A Collect for the Commemoration of the Beheading of St. John the Foreunner

O God, you called John the Baptist to be in birth and death the forerunner of your Son:  Grant that as John gave his life in witness to truth and righteousness, so we may fearlessly contend for the right, even unto the end; through your Son Jesus Christ our Lord, who lives and reigns with you and the Holy Spirit, one God, now and forever.  Amen.
Posted by Brandon Filbert at 1:53 PM