The Fourth Day of Christmas: The Holy Innocents, Then and Now

When Herod saw that he had been tricked by the wise men, he was infuriated, and he sent and killed all the children in and around Bethlehem who were two years old or under, according to the time that he had learned from the wise men. Then was fulfilled what had been spoken through the prophet Jeremiah:
"A voice was heard in Ramah,
wailing and loud lamentation,
Rachel weeping for her children;
she refused to be consoled, because they are no more."
Matthew 2:16-18

In recent years there has appeared a phenomenon known as the “Blue Christmas.” Sometimes called  "The Longest Night," these services provide an opportunity for those experiencing grief, sorrow, or pain during the festive Christmas season to express these feelings openly and liturgically. Most such services occur in the days surrounding the Winter Solstice, when the nights are longest. Though not hugely attended, they speak of a very real need in an increasingly unreal season.

The reason for such commemorations is that Christmas has become understood as a sort of unrelentingly happy time, with no room for the more painful side of human existence, let alone sin and wickedness. Thus, this season has turned its back on its origins, when God came into a world dominated by various forms of slavery, violence, repression, and brutality in order to redeem it from within. Indeed, for most secular Americans (and, sadly, a lot of religious Americans as well) the very meaning of “God-with-us” and “He-shall-save-us-from-our-sin” has been replaced by “Have a holly, jolly, Christmas.” The "Blue Christmas" service is a kind of antidote to this. But, there is a deeper question about the authentic nature of Christmastide that must be addressed here.

For those of us who practice the Christian Year with some measure of care it is impossible to reduce Christmas to sentimental escapism and denial of human need. The Scriptures simply do not agree with this "24-7 happiness machine" vision of the Nativity. Many of the old Carols—before they were shorn of their uncomfortable lyrics by zealous sentimentalizers—had a distinctly realistic character, with many references to the poor, the cold, the hungry and needy, and our duty to care for each other in the light of the coming Judgment. Dickens’s well-known story “A Christmas Carol,” when read in its entirety, is a scathing indictment of the very consumerism and materialism that fuels our Black Friday culture today. And then there is Holy Innocents’ Day….

The fourth day of Christmas is the annual remembrance, recorded in the Gospel according to Matthew, of Herod’s attempt to destroy a potential rival king by having anyone who might be that rival slaughtered. Though they did not know it, all those little boys were the first to suffer for Christ. They—and their horrified and weeping mothers—fell at the head of a bloody river of martyrs for the Gospel. Their innocence only highlights how lethal the confrontation between a world based on death and the Gospel of Life really is.

The Slaughter of the Innocents is frequently rejected my modern historians, who want to put it into the realm of propaganda and fairy-tale. They point out that no contemporary account—other than the Bible itself—mentions anything about this event. This is proof enough for those who will not see with the eyes of compassion.

Yet, as with our own day, one suspects that such events were hardly unusual in the first century; the world into which Christ came then—as now—was brimming with horrors and violence perpetrated by fearful and arrogant brutes retaining earthly power. Now, as then, it is also filled with more ordinary people who commit various atrocities to others with little or no thought to the consequences, disposing of their victims as mere inconveniences on the way to self-fulfillment, thinking (in the words of Scripture) that “they are no more” – out of sight, out of mind.

But, the message of this day includes the absolute assurance that the Holy Innocents of every age are not forgotten. The Church has been remembering these lost children for nearly 2000 years. Their worldly insignificance is outshone by their utter preciousness before God and those of us who—like Christ—value the “little ones” of this planet. In our prayers today, we hold all the Innocents of every age and place before God in honor and intercession. It is worthwhile to think about who the voiceless, helpless victims are in our own society, and what we are doing about their plight.

Beyond that, the Holy Innocents remind us that the Church and all its members must stand and work for God’s justice and reconciliation, never accepting cruelty or disposability as the status quo. It is worthwhile to think about who the voiceless, helpless victims are in our own society, and what we are doing about their plight.

There are still so very many who die in the hidden recesses of the world for no other reason than that they don’t fit into our plans, or stand in the way, or present a rival to our obsessions. Like the Holy Innocents of old, they suffer because they thwart some king or dictator or ideology or our own pursuit of an agenda.

Today is the Church’s original Blue Christmas. It is a rightful and necessary part of the Christmas story,  and its honesty frees us to be involved in the struggle for justice and the consolation of those who, like Rachel weeping for her children, have suffered deeply at the hands of all the Herods—great and small—still out there in the dark of this world. 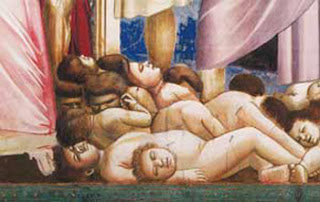 Collect for the Holy Innocents


We remember today, O God, the slaughter of the holy innocents of Bethlehem by King Herod. Receive, we pray, into the arms of your mercy all innocent victims; and by your great might frustrate the designs of evil tyrants and establish your rule of justice, love, and peace; through Jesus Christ our Lord, who lives and reigns with you, in the unity of the Holy Spirit, one God, for ever and ever. Amen.
Posted by Brandon Filbert at 9:48 PM