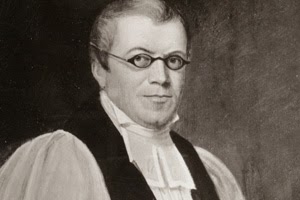 September 12  is the annual commemoration of Bishop John Henry Hobart (1775-1830), one of the most important figures in Episcopal Church history, as well as a significant name in the story of Anglicanism, generally.

As one biographical sketch of Hobart puts it, the period after the American Revolution was one of “suspended animation” for the Episcopal Church. Suspicion dogged it, financial and demographic decline plagued it, and a general anti-religious sentiment pervaded the culture around it. Sound familiar?

In many of the parishes and institutions of the Episcopal Church, as well, a general malaise had set in. Preaching was often dry and remote. Worship was either coldly rubrical or idiosyncratic and aimless. Many Episcopalians seemed to define themselves more “against” other Christian groups they found distasteful than “for” a positive vision of the Gospel in action. A persistent sense of inaction and immobility pervades the Episcopal Church of this period. Again, does this sound familiar?

Like some figure from the Book of Judges, Hobart seemingly came from no-where to challenge this limited understanding of both the Episcopal Church and its mission of sharing the Gospel.

Formed by the best education this country could offer at that time (including the Universities of Pennsylvania and Princeton), and mentored by none other than Bishop William White, Hobart was a thorough-going product of the American Church experience. Perhaps because of this, he looked at the Episcopal not as an institution but as a mission. Where others only saw challenges or limits, he saw opportunities and possibilities. In each of his positions as a priest and later as bishop, his deep formation in the Gospel as a dynamic reality caused him to listen thoughtfully, raise expectations, try new things, and deepen the connection between the contemporary Episcopal Church and its ancient, Apostolic roots.

It was this appeal to Apostolic Christianity that particularly fascinated Hobart. In a time when various denominations demanded "brand loyalty" with all sorts of oaths, "thou-shalt-nots," and documents to be signed before membership, Hobart knew the secret of every effective Anglican revival, and he put it this way: “Evangelical Truth and Apostolic Order.” It was simple, clear, and honest. He did not think it possible to choose between these two things. They were both essential. Knowing well the Scriptures, the Fathers, and the central writings of the Anglican Reformation, he understood the faith holistically—something that had long been lacking in run-of-the-mill Episcopalianism. Anglicanism, to be Anglicanism, requires both a sincere evangelicalism and an authentic practice of the basic Apostolic Faith.

It was this synthesis of the zeal for the Gospel found in Evangelical Christianity along with a deep commitment to the teaching and worship of the Apostolic tradition found in The Book of Common Prayer that marked Hobart’s Christianity. He strove to show the unique way Anglican Christianity is the middle way between extremes—not as a mere compromise, but as positive vision for a mature, whole, balanced, and gracious way to minister and share the message of Christ.

The result was an incredible amount of energy, creativity, and commitment. Hobart travelled widely, found ways to forge new opportunities for mission and evangelism, and preached with an ardor (he had to memorize his sermons due to very poor eyesight, which allowed him to take his eyes off the page) that engaged and challenged others. His personal life of prayer was evident, his standards high; he was willing to “walk the talk,” as they say. He wasn’t without flaws, but he was deeply concerned with living a holy and effective life for Christ and His Church.

Currently, the Episcopal Church is engaged in yet another effort to “jump start” itself in mission and effectiveness. We are spending years analyzing our institutional infrastructure, looking for ways to trim it for greater vitality. This is mostly motivated—sadly—by economic realities. We have become something like a scene in a Faulkner novel, trying to carry on imaginary tea-parties while the house falls down around us. Committees and reports come and go, but the results never vary. After any number of such attempts, one would hope we could see the futility of such efforts. This is not how periods of “suspended animation” are overcome.

Rather, revival always comes from some form of what Bishop Hobart practiced: “Evangelical Truth and Apostolic Order.” Vitality does not come from techniques or (especially) programs—though these things can help—but from a living experience of the Risen Christ in one’s life, and deep desire to share that New Life in Christ with others. We don’t revive our Church; we open ourselves to God so that He may revive His Church.

When God decides to call His prophets, they arise. When the field is right for the planting, then the harvest can come. In this time of malaise and diminished expectations for the Episcopal Church and our own lives as disciples, the focus should probably go less to top-down attempts at revival and more to cultivating a people who are open to “Evangelical Truth and Apostolic Order” in our own day, awaiting God’s action to bring forth the vitality and renewal we do not ourselves possess.

That is what it means to be God’s servants, rather than trying to show God the right way to go about leading His Church. And that day will come, in God’s good time; of that we can be assured. Blessed John Henry Hobart, pray for us!

The Collect for the Commemoration of John Henry Hobart, Bishop

Revive your Church, Lord God of hosts, whenever it falls into complacency and sloth, by raising up devoted leaders like your servant John Henry Hobart whom we remember today; and grant that their faith and vigor of mind may awaken your people to your message and their mission; through Jesus Christ our Lord, who lives and reigns with you and the Holy Spirit, one God, for ever and ever. Amen.
Posted by Brandon Filbert at 3:22 PM

Email ThisBlogThis!Share to TwitterShare to FacebookShare to Pinterest
Labels: Classical Anglicanism, Through the Church Year