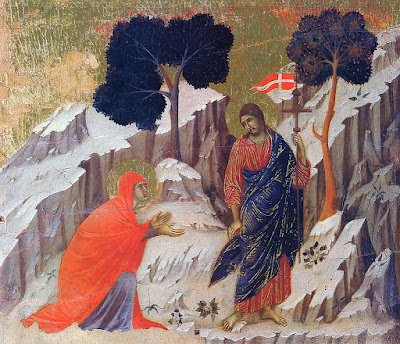 The Collect for the Feast of St. Mary Magdalene

Almighty God, whose blessed Son restored Mary Magdalene to health of body and of mind, and called her to be a witness of his resurrection: Mercifully grant that by your grace we may be healed from all our infirmities and know you in the power of his unending life; who with you and the Holy Spirit lives and reigns, one God, now and for ever. Amen.

Each age seems to view St Mary Magdalene through its own lens, often telling us more about that particular era than the saint herself. At various times, she has been viewed as a “fallen woman” offered forgiveness by Jesus, an apostle to the Roman Emperor (as well as the inventor of the Easter egg tradition), and due to the rise of militant commercial secularism and its “sacrament of sexuality” in recent years, we have had to bear with her as “Mrs. Jesus” in some bestselling books. None of this has a real scriptural basis; some of it is scurrilous; all of it is more or less silly.

As we remember St. Mary today, we are invited to do what the collect for her feast bids us: focus on the issue of healing in this life and resurrection in the next. Scripture tells us that Mary of Magdala was healed by Christ in a profound way…so much so that she never forgot it. She lived her life from a place of personal gratitude to Jesus—just as all who have come to faith in Christ will as we learn the depths of his freeing love for us. Only when we understand that we really have passed from one kind of life (focused on death) to a new one (now focused on Life), will we be more than Christians in name only.

Her response to receiving this new life was to be very faithful to Jesus, personally supporting his ministry, enduring the ups and downs of being associated with him, and caring for him even in death. Her life as found in the Gospels is a beautiful illustration of how we who call ourselves Christians ought to live out that identity. Healing (in all ways and on all levels), received with gratitude leads to true and living discipleship.

St. Mary Magdalene is also notable for her witness to Jesus’ Resurrection. The account in the Gospel according to John is particularly significant. There we are given a carefully-drawn picture of her initial inability to grasp what has happened—utterly understandable—and how that inability eventually is transformed into an awareness leading to joy. This scene, so fruitful for contemplation, is the focus of a passage from a sermon by St. Gregory the Great often read on this day:

When Mary Magdalene came to the tomb and did not find the Lord’s body, she thought it had been taken away and so informed the disciples. After they came and saw the tomb, they too believed what Mary had told them. The text then says: The disciples went back home, and it adds: but Mary wept and remained standing outside the tomb.
We should reflect on Mary’s attitude and the great love she felt for Christ; for though the disciples had left the tomb, she remained. She was still seeking the one she had not found, and while she sought she wept; burning with the fire of love, she longed for him who she thought had been taken away. And so it happened that the woman who stayed behind to seek Christ was the only one to see him. For perseverance is essential to any good deed, as the voice of truth tells us: Whoever perseveres to the end will be saved.
At first she sought but did not find, but when she persevered it happened that she found what she was looking for. When our desires are not satisfied, they grow stronger, and becoming stronger they take hold of their object. Holy desires likewise grow with anticipation, and if they do not grow they are not really desires. Anyone who succeeds in attaining the truth has burned with such a great love. As David says: My soul has thirsted for the living God; when shall I come and appear before the face of God? And so also in the Song of Songs the Church says: I was wounded by love; and again: My soul is melted with love.
Woman, why are you weeping? Whom do you seek? She is asked why she is sorrowing so that her desire might be strengthened; for when she mentions whom she is seeking, her love is kindled all the more ardently.
Jesus says to her: Mary. Jesus is not recognized when he calls her “woman”; so he calls her by name, as though he were saying: Recognize me as I recognize you; for I do not know you as I know others; I know you as yourself. And so Mary, once addressed by name, recognizes who is speaking. She immediately calls him rabboni, that is to say, teacher, because the one whom she sought outwardly was the one who inwardly taught her to keep on searching.

St. Gregory shows us that Mary Magdalene is far above what we have occasionally “used” her for. She is not primarily a sexual sinner made good, or an astute business woman turned Christian, or the necessary yang to Jesus’ yin. No: St. Mary is utterly beyond such trivia. She is a one of the most visible and human expressions of persevering faith in the New Testament. That perseverance, born of a personal encounter with Christ, and nourished by gratitude and service, results in a faith strong enough to take what happens at the Crucifixion and remain open, loving, and devoted until the moment that the risen and transformed Christ speaks to her. This is precisely what active, living Christian discipleship looks like today.

Persevering faith is not particularly valued here in America. We praise relevance, hip-ness, visibility, productivity…but not perseverance. We like getting things quickly, easily: making anyone wait, forming people over time so that they are more than themselves…these are hard sells in our current climate, drowned out by each new fad that sweeps across our searching, anxious, yet deeply impatient culture. Yet, St. Gregory lauds St. Mary Magdalene for just this characteristic, and so should we.

Because Mary refuses to abandon the search for Christ, she is able to hear him when he speaks. Because she wants to hear so much, she is ready to hear. What we want so often tills the ground of our hearts, allows for that which is sown to become a rich harvest.

St. Mary’s persevering faith sets her alongside the great figures of our faith: David, Solomon, the Prophets, Paul, and many others whose search for the Truth, relationship with God in Christ, and complete healing is so great that they never abandon it. That is, perhaps, the most glorious thing we celebrate today…and the most subversive, counter-cultural aspect of her witness. Based in Holy Scripture, we find someone far more powerful and influential than any of the chimeras produced in the past. Celebrate the true Magdalene…and better yet, emulate her.
Posted by Brandon Filbert at 3:06 PM