To Tell the Truth: The Martyrdom of the Holy Forerunner 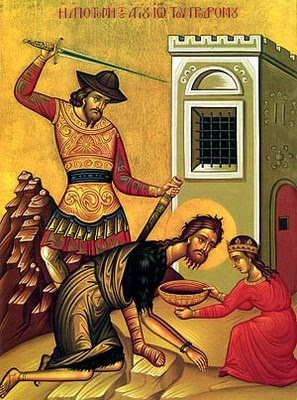 August 29 is the commemoration of the beheading of St. John the Baptist. It is a solemn day of fasting in the Orthodox church, and is commemorated in the Roman Catholic calendar, as well as by many Anglicans (including the Church of England). For reasons that are hard to explain, it is not kept in the Episcopal Church (even though we seem bent on adding everyone possible to our Calendar). This omission is grievous and bizarre, as today’s observance is very much attested by the Holy Scriptures and the ancient witness of the Undivided Church. It is also a telling omission (I’ll get to that later).

So deeply connected are the lives and teachings of Jesus Christ and his Forerunner that the omission of this feast blunts the Calendar’s message on the point. The connection between his nativity on June 24 and Christ's nativity at Christmas is a staple of the Church Year. His role in Christ's baptism is central to Epiphanytide. His boldness and proclaiming preparation and repentance is recalled in Advent and Lent. His promise that the one he heralds will bring the Holy Spirit and fire binds Advent to Pentecost. John’s fierce insistence on Divine truth and faithfulness in the face of earthly power is a foundation on which Jesus built and upon which the Christian Church’s ministry of prophetic witness is based. Because of his utter fidelity to God’s call, he died a martyr’s death – prefiguring Christ's death at the hands of unjust leaders, as well as the countless other who follow in his footsteps to this day.  Indeed, our day has seen the making of a vast number of martyrs, many beheaded in much the same manner as the Blessed Forerunner.

Yet, the Episcopal Church has decided it more important to remember John Bunyan in its Calendar on  this day than to honor the martyrdom of St. John the Baptist. Why? Bunyan was not a member of the Anglican Church, and in fact was opposed to it. Would he have wanted a commemoration in our Calendar? One doubts it. Do a great many Episcopalians read Grace Abounding to the Chief of Sinners, or A Pilgrim’s Progress today, thus necessitating his commemoration? I don’t believe so.

Perhaps the rub comes from the fact that John was beheaded for condemning sin that was, well, awfully close to home. When John said to Herod “you cannot have her” with regard to Herod’s liaison with Herodias, the wife of his brother Herod Philip, it was too much. Herodias, tired of Herod’s anxious shilly-shallying, wanted this meddling holy man dead and found a way to achieve it. Using the occasion of a drunken birthday party, she slyly planted her daughter Salome as dancing bait for Herod’s inebriate lust. Wildly making promises of largesse, Herod was in her debt…and Salome took him down like an experienced hustler takes down a green rube just off the bus from Nowheresville. In the time it takes for music to stop, Herod was in over his head, and John was without his. The message was clear: Don’t get in the way of powerful people when sex, politics, and personal gratification are on the line. This is ever the case.

The portrait of arrogance, privilege, decadence, and drunkenness emerging here may be a little too life-like for some Episcopal glitterati. This year’s horror of witnessing a bishop in the Episcopal Church kill a man through a drunken hit-and-run accident—including details which make it hard not to draw the conclusion that the said bishop’s “condition” was likely an open secret for a long while and that the Episcopal church was initially more concerned with Brand Protection than it was with fulfilling its supposed mission to “strive for justice and peace among all people, and respect the dignity of every human being”—serve only to show that the Bible is hardly an outdated document. Given this side of things, perhaps the events surrounding the commemoration of St. John’s beheading for “speaking truth to [debauched] power” is a wee bit too hot to handle. Better keep it under wraps, sort of like St. John in the dungeon.

The teaching potential of this day, however, remains great. It shows that to confront evil, we need endurance. Sometimes, it seems that evil actually wins; but its victory—like Herodias’—is only apparent. In reality, God’s power and truth is finally completely victorious. What is needed, though, is an ongoing commitment to Gospel justice, even in the face of evil’s awful array of violence, lies, distortion, and corruption. To the last drop, the last moment, the last sentence, St. John the Baptist witnessed to such a commitment. This day celebrates and honors that commitment. It reminds us that by following Jesus Christ as Lord (the One St. John heralded), we share in this revolutionary ministry of truth-telling. If we truly believe that one of the highest measures of Christian authenticity is the ability to stand up to power in the strength of justice, we had better join the marchers in Selma and the great figures of the Civil Rights movement by being deeply rooted in the actual facts of what it costs to take up this struggle.

If we in the trenches take this vocation seriously, maybe even the Episcopal hierarchy will eventually see fit to honor the Holy Truth-Teller on the day when all lies are exposed and all elites are reminded of their dangerous position. I won’t hold my breath on that, but I’m sure going to keep this Holy Day, even if it is not on our Calendar. It is, after all, in the “Good Book” already.

A Collect for the Martyrdom of St. John the Baptist

God our Father, you called John the Baptist to be the herald of your Son's birth and death. As he gave his life in witness to truth and justice, so may we strive to profess our faith in your Gospel. Grant this through our Lord Jesus Christ, your Son, who lives and reigns with you and the Holy Spirit, one God, for ever and ever. Amen.

Posted by Brandon Filbert at 7:57 PM