Independence Day: Knowing Whose We Are 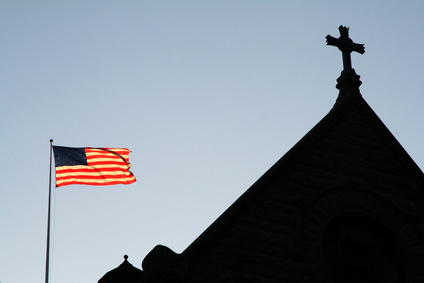 Our citizenship is in heaven, and it is from there that we are expecting a Savior, the Lord Jesus Christ.
— Philippians 3:20 (NRSV)

Lord God Almighty, in whose Name the founders of this country won liberty for themselves and for us, and lit the torch of freedom for nations then unborn: Grant that we and all the people of this land may have grace to maintain our liberties in righteousness and peace; through Jesus Christ our Lord, who lives and reigns with you and the Holy Spirit, one God, for ever and ever. Amen.
— Collect for Independence Day, BCP

On July 4th the United States celebrates the anniversary of its declaration of independence from Great Britain in 1776, and the Episcopal Church honors the occasion with a Holy Day in the calendar, complete with special prayers and readings from sacred scripture. Given the season of the year—and the season in our nation—it seems a good time to reflect on the question of our identity as Christians versus that of our citizenship on earth.

The New Testament has a number of perspectives on the role and meaning of civil governance, but the overall attitude might best be summed up in the quote above from Philippians. While not anti-state (see Romans 10), the Church has taken from Jesus’ teaching and practice a keen awareness that Christians are not defined by political identities. While we pray for the State, work for good governance, vote, and pay our taxes, we have a higher loyalty and identity than merely being Americans, Democrats, Republicans, Independents, or what have you. Our Lord’s words “My kingdom is not of this world” remain central to the Christian attitude to the political arena.

This is important to remember in the face of the increasing polarization and party identification sweeping our nation. A recent survey showed that, whereas only 4% of the population once would have been seriously disturbed if a child married someone from the other major political party, some 40% of respondents today said they would. Another study showed that the major reason—by far—people are involved in politics today is the utter loathing of the “other party,” rather than feeling positive about their own political party or political service in general. These are signs of an increasingly hostile, unforgiving division...one replacing the old divisions based on religion. How are we to respond to this?

When Episcopalians think about identity, we immediately re- member our baptism. Baptism is our birth into the radically new kind of community mentioned in 1 Peter 2:9: “But you are a chosen race, a royal priesthood, a holy nation, God’s own people, in order that you may proclaim the mighty acts of him who called you out of darkness into his marvelous light.” Our allegiance to this holy nation rises above all other identities and markers in this or any other era.

Many people today are inclined to focus on the five baptismal promises (BCP pp. 304-5), especially the final promise that we will “strive for justice and peace among all people, and respect the dignity of every human being.” Important as these promises are, they are predicated on what happens a little earlier in the Baptismal service: the renunciations and affirmations (BCP pp. 302-3).

In these words we make clear that our fundamental loyalty and identity is in Christ Jesus as Lord and Savior. We reject the worldly powers and identities that corrupt and destroy us, distorting our vision from that of Christ into the twisted, bitter, and hateful rhetoric of our day. This includes all “-isms” of every era. This portion of the baptismal liturgy originates in Roman law: the transfer of ownership of slaves from one master to another. What we confess here is that until we are a part of Christ’s household, we are “owned” by the World and its corrupting, distorting “logic,” a logic enforced by evil structures and patterns in civil society, among other things.

When we have renounced our old “owner” and chosen (freely) Jesus as the Lord- who-frees, we may then go on to affirm our faith (in the words of the Apostles’ Creed) and pledge how we will live out that faith (the five baptismal promises). To attempt to live as Christians while still maintaining loyalty to something else above Christ would be a dangerous hypocrisy.

It is just this hypocrisy we need to think about in our day, I believe. How can we bring the Gospel, and not a merely human agenda, to bear on the issues of our day? How can Christians provide a true alternative to the “tit-for-tat,” “gotcha,” and zero-sum culture of American politics today? Surely no one political party has all the righteousness or the answers. May Christians associate with one political party, ideology, or identity so as to treat it as virtually identical to the Gospel? I think not. Our Lord was never the member of a “party,” and the Gospel will never let us rest easy on this matter.

It is hypocritical to bemoan the condition of our divided and embittered nation and then add to it by blending the baptismal life found in the Scriptures with today’s partisanship and hostility. As Jesus points out, we cannot serve two masters: one must be the true loyalty and the other lived in its light. Which will it be? That answer depends on whose we are.

The collect for Independence Day prays that “we and all the people of this land may have grace to maintain our liberties in righteousness and peace.” We must be active and serious in our pursuit of a nation where freedom and justice are available to all, and also one where righteousness—in all its forms—flourishes; and, we must do all this in peace. Not the peace of being on the winning side of a vote or an issue, or the peace of trouncing our opponents. The peace this prayer speaks of is the Peace of God, a peace that “surpasses understanding” because it is not an ideology to be enforced but the fruit of a relationship that has been given and accepted. It is the peace of heaven, known in each Eucharist and all true Christian love.

This July Fourth I commend to you the full spiritual observance of Independence Day. See it as a time to reaffirm your most elemental loyalty to Christ and his Gospel, and through that loyalty to recommit to a loving, hopeful, and merciful engagement with politics. Be willing to walk the balance beam of Christian political life...a balance which my be maintained only by an ongoing communion with God the Holy Trinity. Work for justice, work for righteousness...but above all remember your baptism and do all things, pray all things, as a member of Christ’s Body and for the love of Christ. Only then will our celebration of this day be pleasing to Our Lord, and only then will our efforts and prayers meet with God’s blessing.
Posted by Brandon Filbert at 12:12 PM