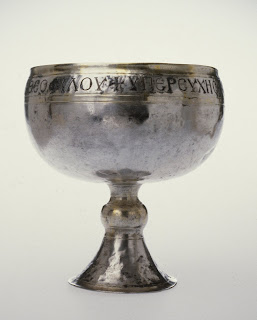 The Power of Perspective

Today we enter the Triduum, the “Great Three Days” that are the most ancient part of the Christian Year, and go to the very DNA of the faith. Time, as we usually reckon it, will be suspended. For these three sunrises are accounted as one “day” in the liturgy, one great, total, and cosmic reality: unified, whole, complete.

This is manifested in worship by the simple fact that the Maundy Thursday liturgy does not “end” in the conventional sense. There is no dismissal of the people, telling them that “the worship is over and the service has begun,” to use the old cliché. Rather, we simply have a prayer over the people and go into “recess” until the Good Friday liturgy resumes the public offering of worship tomorrow. In between, various devotions are offered: the altar is stripped as we witness Christ's betrayal and humiliated; an all-night prayer vigil at the altar of repose will be held; the Way of the Cross on Friday at noon – but the worship from tonight through the end of the Easter Vigil is all understood to be one offering, one liturgy celebrating this one great Mystery of our redemption.

And this is not only true liturgically, as if the liturgy were some sort of performance divorced from the “bigger picture” of the Gospel. This essential and inherent one-ness is true of the Mystery of God's Love we have entered as well. There is a lamentable tendency in Western Christianity to try and chop up the various stages of Holy Week, and especially the Triduum, into bite-sized chunks, individual pieces that we like more or less than others. We see this most acutely with the tendency in many Christian circles to focus primarily on the Last Supper, or the Cross, or the Empty Tomb rather than looking on all of them as a unified action in which the mystery of God’s redemptive love is offered.

Interestingly, few churches put a significant focus on the Liturgy of Holy Thursday. This is, in part, because it is so deeply sacramental. It involves things and actions participating in eternal realities, and cannot be reduced to a purely intellectual “head trip.” The washing of the disciples’ feet and the institution of the Eucharist can only take on their rightful meaning when understood from this sacramental perspective. They are signs by which grace is communicated, not historical rituals in which we look back longingly to a distant past.

And this is one of the most important points about the first of the Great Three Days: how we understand the Eucharist will, in large measure, dictate everything we do from today and through Easter.

If our mindset is that the Eucharist is primarily a looking back, a conjuring up of events lodged in times before us, then this is how we will be “geared” to understand everything in the Triduum. Events such as the foot-washing, the veneration of the cross, the kindling of the New Fire and the proclamation of the Resurrection itself will, like it or not, be viewed and experienced through the lens of historical artifact, not living reality. This is why the decline of Eucharistic theology in the Western tradition – even the Roman Catholic Church reports grave problems in this area – into a mere “memorial” of an incident in Jerusalem centuries ago is so disastrous. It isolates everything truly radical, truly life-giving and life-changing about the Way of Christ in a spiritual museum. Under these circumstances the best we can do is try and whip up some devotional energy around Holy Week, maybe some personal “guilt” over Christ’s Passion, and produce cinematic re-presentations of the events found in the Scriptures. The result, though, is sadly tired and essentially tragic; such a grasp of the events of Christ’s Passion, Death, and Resurrection cannot begin to excite genuine joy, the joy that arises when one is freed from imprisonment or healed of a terrible sickness.

If, on the other hand, the Eucharist we celebrate this evening – which Our Lord commanded us to do each time we gather in order that he might be present with us until his return – is an event instituted in the past but essentially oriented towards the future, then everything changes. When we learn to experience the Eucharist, as the 4th century Eucharistic prayer of St. Basil (forming the basis of Prayer D in the Book of Common Prayer) puts it:

Father, we now celebrate this memorial of our redemption. Recalling Christ’s death and his descent among the dead, proclaiming his resurrection and ascension to your right hand, awaiting his coming in glory; and offering to you, from the gifts you have given us, this bread and this cup, we praise you and we bless you. We praise you, we bless you, we give thanks to you, and we pray to your, Lord our God...

we may come to experience the fullness of God’s redemptive plan past, present, and future. If we receive the sacred Mysteries of Christ in the liturgy with this understanding, we are precisely not locked in the past, practicing the "dead faith of a dead people." We are given a foretaste of the Triumphal Supper of the Lamb, the eschatological banquet shown in Revelation. We are truly alive, truly free.

When this is so, when it is vibrantly true and alive in our minds that the Eucharist is each an every time a re-presentation of the Victory of God and his faithful people over the power of death, sin, and alienation, and that by participating in the Eucharist we are made truly alive and capable of Living with a death-proof perspective and love, then the Eucharist stops being a “symbol” of something – it becomes that “something” itself. We are re-made into a Resurrected People, capable of bearing the message of the Gospel in our daily lives. And that is why it was given us.

Tonight the Lord hosts a meal he has “earnestly desired” to share with us. In the context of that meal, he washes the feet of his disciples – an act of the humblest service, almost completely unintelligible to the minds of 1st century hearers of this story as no teacher would imagine lowering himself to such a level in the eyes of his students. But Jesus does this to show them – and us – that we can never have fellowship with him and confess him as Lord without translating that faith and fellowship into real acts of love, service, and compassion done with his humility.

If we have come to understand the Eucharist as the “operational reality” of the Christian life, a sharing in the victory of God through his gift of the Holy Spirit in Baptism, then we will be able to understand the necessity of living out that gift in love by fulfilling his command to “take up our cross” and follow him. Having received the first-fruits of that New Life by the Spirit in the sacraments of Christ’s Body the Church, and living in the Now of God’s power rather than by trying to resuscitate or manufacture an ancient and remote past, we can enter into the overwhelming mystery of the Cross tomorrow from a position of profound love and gratitude rather than fear and guilt. Such is the power of perspective in the heart of a believer.

Posted by Brandon Filbert at 3:18 PM