Joseph and his brothers: Compunction, Repentance, Forgiveness, and Healing – Part I 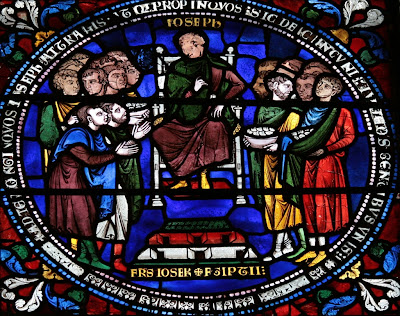 On the third day Joseph said to them, ‘Do this and you will live, for I fear God: if you are honest men, let one of your brothers stay here where you are imprisoned. The rest of you shall go and carry grain for the famine of your households, and bring your youngest brother to me. Thus your words will be verified, and you shall not die.’ And they agreed to do so. They said to one another, ‘Alas, we are paying the penalty for what we did to our brother; we saw his anguish when he pleaded with us, but we would not listen. That is why this anguish has come upon us.’ Then Reuben answered them, ‘Did I not tell you not to wrong the boy? But you would not listen. So now there comes a reckoning for his blood.’ They did not know that Joseph understood them, since he spoke with them through an interpreter. He turned away from them and wept; then he returned and spoke to them. And he picked out Simeon and had him bound before their eyes. Joseph then gave orders to fill their bags with grain, to return every man’s money to his sack, and to give them provisions for their journey. This was done for them.
They loaded their donkeys with their grain, and departed. When one of them opened his sack to give his donkey fodder at the lodging-place, he saw his money at the top of the sack. He said to his brothers, ‘My money has been put back; here it is in my sack!’ At this they lost heart and turned trembling to one another, saying, ‘What is this that God has done to us?’

Genesis 42: 18-28
The life of Joseph has always been seen by Christians as a forerunner of Christ’s Passion and Resurrection. In the Early Christian lectionaries this portion of Genesis was often read in the days leading up to Holy Week to put believers in mind of all that Christ was about to undergo.
The account of Joseph’s meeting his brothers—who do not yet know who he is— found in the forty-second chapter of Genesis has much to teach us as disciples. For not only is the patriarch Joseph a forerunner of Christ in his sufferings and triumph, but he is also a model of one whose persevering prayerfulness results in his own vindication and in the saving of others—all done to the glory of the God who providentially guides us through our sufferings to our peace and union with himself.
When the brothers appear before him, Joseph could with justification have chosen to unleash his anger upon them for the horrible wrongs done to him by their envy and malice—except that he does not have this sort of anger in him. That anger has been released by reliance on God, prayer to God, and a complete surrender to him honed through deep and real struggle. It is a response both powerful and purchased at a great price. When the brothers appear before him, Joseph’s intentions are instead to heal them of their unacknowledged spiritual wounds through the arts of compunction, repentance, illumination, and reconciliation.
Joseph accuses them of being spies. He puts them in the position of helplessness he himself was put in by them so long ago. This is not done out of revenge or hatred, as the story’s unfolding makes clear, but out of the knowledge that the brothers must first be shaken out of their complacency, the ‘sleep’ of their unthinking condition.
His brothers are in Egypt, they believe, only to fulfill their father Israel’s order to find food in a time of famine. They are concerned only with an external job rather than on the deeper arc of their life journey. This sort of blindness to what is truly essential plagues us all, especially in a world organized so completely as today’s is around the unvarying rhythm of employment—work which often has no clear spiritual content at all. Before any reconciliation with God and their brother can take place, this dullness must be overcome.
To accomplish this, they are kept in captivity for three days. Not only does this prefigure Christ’s three days imprisonment in death, it also begins the brothers’ transformation. It forces them out of their self-absorbed pattern, as do so many of the sudden reversals in life we deeply resent but which, by God’s grace, can be the occasion for our seeing the truth of our lives. The brothers needed to repent for a hidden sin. They could never be healed of it without this repentance. With the calamity of sudden imprisonment they were forced to see their utter powerlessness and perhaps for a time despaired of the future. For them, it may well have been a time of feeling totally lost. But God, who seeks only our salvation, remains eternally vigilant and now uses this trial as the means for their healing. The stage is set for a radical healing of their souls, leading to their restoration and ultimately pivotal role in salvation history…
…but much must happen first in order for them to become worthy of this gift.
Posted by Brandon Filbert at 8:21 PM