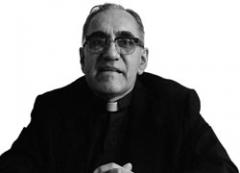 When Archbishop Romero was assassinated while celebrating the Eucharist in 1980, he instantly became known as a martyr, a witness, to the wider Church. This shocking act of violence—one of so many in El Salvador in those days—stands as a sign of the desperation of tyrannical, ideological governments in the face of the Gospel. Using guns, the Government’s henchmen sought to silence the most powerful critic of their wanton brutality. Though they achieved their goal in the short run, they found that their adversary was, in the larger sense, immune to bullets. In killing one man (and in the ensuing massacre at his funeral), they raised up an entirely new kind of resistance; their cowardly acts shined a bright light on the wrongs of the El Salvadorian economy, government, and all who supported them. As Romero himself said: “Justice cannot be killed.”
The daily office lesson from the Old Testament today, though not appointed in the commemoration of Archbishop Romero, is marvelously appropriate. It is the story of Moses and the Burning Bush. In Moses’ encounter with God, a most unlikely candidate is called to proclaim freedom to an oppressed people.
Romero, when appointed to head the Church in El Salvador, seemed a most unlikely choice to confront his country’s institutions of power. His gentleness and conformity to the “mind of the Church” appeared to bode ill for effective protest against the sins of the then-status quo. But it was precisely because of the depth of his commitment to the holiness of the Gospel and the Church as the people of God that he could no longer remain cautious about the wrongs before him. He spoke out, preaching God’s freedom to a repressed people. Once the government knew it could not control him, his earthly fate was sealed.
Some people speak of “the era of the martyrs,” as if it were a long while ago. In fact, it continues today. Youcef Nadarkhani, a Christian pastor sentenced to death in Iran, may soon be added to the list of the martyrs of the Faith (pray for him and all Christians in that land). Wherever the Church speaks the Gospel authentically to “the powers of this world,” martyrdom is likely. The modern era continues to see the most martyrs in Christian history. But, “justice cannot be killed,” and (as Tertullian put it so long ago) “the blood of the martyrs is the seed of the Church.” It is this assurance, this clarity of mission that gives the holy martyrs of all ages their courage.
May we all grow in fidelity to the Gospel and courage to proclaim it in our own day.
Collect for Oscar Romero, Archbishop and Martyr
Almighty God, you called your servant Oscar Romero to be a voice for the voiceless poor, and to give his life as a seed of freedom and a sign of hope: Grant that, inspired by his sacrifice and the example of the martyrs of El Salvador, we may without fear or favor witness to your Word who abides, your Word who is Life, even Jesus Christ our Lord, to whom, with you and the Holy Spirit, be praise and glory now and for ever. Amen.
Posted by Brandon Filbert at 10:49 AM