Revelation, Eucharist, and a Priestly People 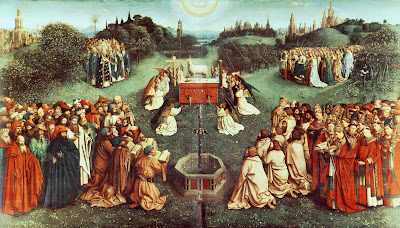 When he had taken the scroll, the four living creatures and the twenty-four elders fell before the Lamb, each holding a harp and golden bowls full of incense, which are the prayers of the saints. They sing a new song:

‘You are worthy to take the scroll
and to open its seals,
for you were slaughtered and by your blood you ransomed for God
saints from every tribe and language and people and nation;
you have made them to be a kingdom and priests serving our God,
and they will reign on earth.’
Revelation 5:8-10 (NRSV)

At the Daily Office today the Book of Common Prayer lectionary (1979) appoints the fifth chapter of Revelation to be read. It is supremely wise and illustrative to do so on a Sunday evening, after the Holy Eucharist has been celebrated and received and when we bidden to praise God once again for the joy and privilege of sharing in the Risen Christ’s presence through his sacred Body and Blood. In a sacramental tradition, all of these elements combine together in a holy logic, a profound expression of "Love's redeeming work" in and through Christ's Body, the Church.

For those who did not grow up in a liturgical church, or who have not been formed in liturgy as adults, the Book of Revelation can seem so odd, so foreign that it must either be discarded as an aberrant nightmare or treated as a sort of “driver’s manual to the End Times.” Either way, it become a remote book, filled with mysterious, scary, and bizarre images.

Christians imbued with liturgy, however, can find much that is familiar and meaningful in the Apocalypse. We experience this text in a way one simply cannot from a non-liturgical vantage point.

The fifth chapter of Revelation is a good example. The “sealed book” at the chapter’s beginning uses the image of a Roman will. Only the “Lamb that was slain” (but who lives again) is able to open it. When he is about to, a chorus of praise erupts. The gifts of the Kingdom and an eternal Priesthood are celebrated in rapturous language (no pun intended). The heavenly court sing, fall to their knees, prostrate themselves in worship. All is veiled in a cloud of prayer-made-visible: the smoke of incense.

For those who practice an austere, intellectualized form of Christianity in which the body and the senses are relegated to observer status, all of this would sound utterly peculiar and perhaps even a bit offensive. At least it would seem an event whose meaning was locked in a distant past or reserved for a yet as unrevealed future.

For sacramentally-nourished Anglicans, though, it is both a future fulfillment AND a present reality. The Holy Eucharist is for us an immersion in the Kingdom of God “come near,” as Our Lord spoke about it, when the gift of New Life in him through the Paschal Mystery is shared with all of us. Jesus Christ, the Great High Priest, is praised by his priestly people, much as we see in the reading from Revelation this evening. His victory over death is recounted. Our sharing in that victory now is glorified as we look into a final victory that has already happened in heaven. Past, present, and future are--briefly--shown to have an underlying continuity. Liturgy, scripture, and Christian mission are fused together for catholic Anglicans in a powerful way, full of promise and hope even while we labor and struggle in the “not yet” of this world.

Because of our use of portions of Revelation in the Daily Office and at the Eucharist, this book is not for us primarily a tool for repression or fear. Neither is it a cryptic manual used to condemn various cultural and political enemies to hell. Rather, it is a direct participation in the Mystery of Salvation, a revealing of God’s judgment in truth and justice. It is also a promise of grace and hope in the midst of earthly struggles, made known in a living, breathing community.

As I stood with the People of God in the liturgy today, the smoke from the censer revealed by a shaft of light streaming in from the clerestory windows while we sang the “Thrice Holy Hymn” of praise to God the Undivided Trinity, I was intensely conscious of how we had been formed into a mirror of the Heavenly worship in Revelation. The Lamb upon the Throne was at the center of our praise, and we his people, were joyous and thankful for the gift of eternal life in him.

The worship we offer is not an empty show, nor is it a recreation of something from a long time ago. It is an overwhelming partaking in the “now” of God, revealing the love given to humanity in Christ Jesus and the power we possess through sharing in his Priesthood—power to live lives of dignity, purpose, and peace. The lesson from Revelation I read at Evening Prayers brought this knowledge to a new level of purpose and joy.

I pray that others may come to know the scriptural, liturgical, and spiritual wholeness of such worship. It must be experienced to be understood…may its power transform the lives of others whom God has drawn to it, even as it has mine.

Posted by Brandon Filbert at 8:20 PM