Stephen: The Crown and Touchstone of Christian Witness 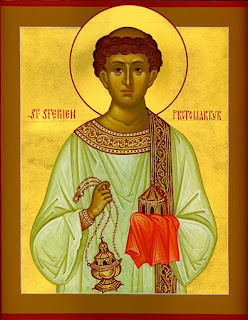 We give you thanks, O Lord of glory, for the example of the first martyr Stephen, who looked up to heaven and prayed for his persecutors to your Son Jesus Christ, who stands at your right hand; where he lives and reigns with you and the Holy Spirit, one God, in glory everlasting.  Amen.

In the days following Christmas Day, a series of Feasts occur in rapid succession. Each one is, to a certain degree, a commemoration of a different way of witnessing to Christ. The first of these is St. Stephen, whose story is told in the Book of Acts (in chapters 6-7, with chapter 8 flowing from the consequences of Stephen’s stoning).

Stephen was the Proto-Martyr (first martyr, Greek for "witness") of the Christian faith. He was also among the first deacons, a ministry of servant leadership in the Church—indeed, the first-named among the three ordained ministries of Deacon, Priest, and Bishop.

Stephen’s brief ministry, like a shooting star, powerfully affected all those who witnessed it. His speech before the Sanhedrin is a compression of the Old Testament and its fulfillment in Christ that, along with the Epistle to the Hebrews, makes clear how immediate was the Church’s understanding of the unity of all Salvation History. In St. Stephen, we see the Old and New Testaments integrated and understood; we also see both the qualities of humble service and powerful leadership united in one person. So complete is his witness that even his name forms part of it: Stephanos means “Crown” in Greek.

His honesty and fearlessness earned him no respect from the political and religious leadership. Then, as now, those in power wanted to hear affirmation of the status quo rather than focus on the “bigger picture,” of which humans are always servants—not controllers. He was condemned, taken out, and stoned to death.

This, in the world’s eye, was his destruction. For the Church, however, it was his true “crowning.” His martyrdom set the pattern for all authentic Christian martyrdom: it pointed to Christ, not to Stephen. Stephen committed no violence towards others in order to prove a point. The point was “proved” by the Theophany of Christ at God’s right hand as Stephen died. We must at all costs keep this mind when grappling with what martyrdom means in the Christian faith.

The author of Acts ends Stephen’s earthly journey with the simple words: “While they were stoning Stephen, he prayed, ‘Lord Jesus, receive my spirit.’ Then he knelt down and cried out in a loud voice, ‘Lord, do not hold this sin against them.’ When he had said this, he died.” To the end, Stephen—like all faithful disciples—sought only to be like his Lord in humility and love even as he refused to compromise in matters of faith, truth, and justice.

It is essential in this era of martyr-terrorism to understand the unique character of Christian witness/martyrdom: it is to be like Jesus Christ. This means any form of pseudo-martyrdom involving violence or manipulation is counterfeit and blasphemous.

St. Stephen was a witness to the Gospel both in will and deed. He, like all of us, was called to be ready to offer his life as a libation to God and our neighbor. When that call came, he did so. His was a crowning total witness--the first of so many--in the Christian faith. For this we give thanks, as the carol says, “on the Feast of Stephen.”
Posted by Brandon Filbert at 11:13 AM