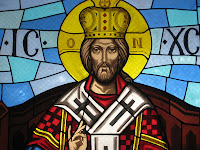 Almighty and everlasting God, whose will it is to restore all things in your well-beloved Son, the King of kings and Lord of lords: Mercifully grant that the peoples of the earth, divided and enslaved by sin, may be freed and brought together under his most gracious rule; who lives and reigns with you and the Holy Spirit, one God, now and for ever. Amen.

The last Sunday of the Church Year has become known as “Christ-the-King Sunday,” even though the Prayer Book does not actually call it this (this name is borrowed from the Roman Catholic Church, which designated this Sunday as “Christ-the-King” in the 1920’s, after moving it from the Sunday prior to All Saints’ Day). The Sunday has become particularly familiar to us because of the popular hymns sung to commemorate it, particularly “Crown Him with many Crowns,” “All hail the power of Jesus’ Name,” and “King of Glory, King of Peace.”

The Feast takes up the many references in Scripture to Christ as both a member of the Royal Davidic line of Israel and his Kingship as Messiah, and then juxtaposes our presuppositions of what “royal” means with the reality of Christ’s particular way of being the “King of Glory.” His humility and his power through love rather than violence is made explicit, and we are all challenged to give our ultimate loyalty to Christ the King, rather than earthly claimants. For, no leader, no political party or economic system, no “life-style” or ideology may take the place of Jesus as Lord.

Christ-the-King, born out of the horror and violence of the First World War and the Communist Revolution in Russia, is a deeply relevant commemoration to our time. Our era finds it difficult to surrender ultimate authority to anyone outside the individual. We have become deeply “invested” in our autonomy – literally, in our being a law unto ourselves. This quest for autonomy has deepened the alienation between God and humanity, as well as between people – just when our technological capacity could help us recognize our common humanity, our need for the spiritual completion available in Christ.

Christ came as a totally new kind of king; He rejected earthly kingship’s trappings, the search for an existence apart from the Creation, apart from each other, apart from His Father’s will and love. He did this in order to lead by example, sharing with us the path each person, each family and society and movement of people must take. Until we accept this truth, human history will be the story of the rise and fall of empires built on death. When we as individuals and as nations give our loyalty to Christ the King and no other, we receive not servitude but freedom, the freedom to join Christ in service to others now, and in glory in heaven, where He lives and reigns for ever and ever.

(Picture: Stained glass window at the Melkite Catholic Annunciation Cathedral in Rosedale, Massachusetts, depicting Christ the King with the regalia of a Byzantine Emperor. January 2009 photo by John Stephen Dwyer.)

Posted by Brandon Filbert at 7:58 PM