The Jar of Manna 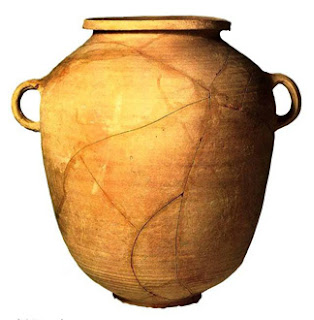 Moses said, ‘This is what the Lord has commanded: “Let an omer of it [Manna] be kept throughout your generations, in order that they may see the food with which I fed you in the wilderness, when I brought you out of the land of Egypt.” ’ And Moses said to Aaron, ‘Take a jar, and put an omer of manna in it, and place it before the Lord, to be kept throughout your generations.’ As the Lord commanded Moses, so Aaron placed it before the covenant, for safe-keeping. The Israelites ate manna for forty years, until they came to a habitable land; they ate manna, until they came to the border of the land of Canaan. (Exodus 16:32-35)

The passage in today’s Daily Office lesson from Exodus 16 (vv. 23-36) places before us an honest if difficult to swallow picture of the human person. Given the opportunity to rest in Divine blessing and peace, we will (left to our own devices) trudge on, attempting to justify ourselves at whatever the cost, choosing our own diminished version of life over the gift of Life itself from God.

The Hebrews, having been freed from slavery and degradation, are now given provision during their long sojourn in the wilderness. Their need for food is matched by God’s desire to feed them. Their response, however, casts the die for all that follows. Echoing the sin of Adam and Eve, they do not trust in God, the God who had just miraculously delivered them from their enemies. Instead, they commence a cacophony of barely-concealed bitterness—“murmuring”—against Moses, Aaron, and God. They began to fantasize about life in Egypt, turning their past suffering into false memories of plenty and freedom. Within sight of the Red Sea and their deliverance, they already wanted to turn back to captivity and death.

When God gave them the quail and the mysterious but free manna, the people—as if consciously preparing to give birth to modern American consumerists—responded by applying all their own demented and selfish thinking to it: they hoarded, complained, and grew bored. When told not to seize control over the situation by storing up extra in their biblical equivalent of Tupperware, they ignored God and created the first failed 401K plan. Instead of giving them freedom and peace, it turned wormy and rotten…just like the crazed housing market equivalent in our day.

When commanded to gather extra manna on Friday in order to keep the Sabbath undisturbed, thus enjoying rest with God and participating in Divine peace, many promptly ignored both the command and the consequent promise of blessing by going out to the desert-cum-supermarket for more on Saturday. There they found a wasteland much like our restless American cultural desert today, populated by stores open on Sunday promising mirages of meaning to people who ostensibly already have the Meaning of Life through Baptism and the Eucharist.

The picture painted by Exodus 16 should indeed be familiar to us. A restless people, always trying to get that extra advantage, never satisfied or truly enjoying anything—hungry for more when already fed, easily bored and searching for novelty. In the honest light of morning, looking in the mirror can be hard to take.

And so the response in many churches has been to discard the mirror for a big screen TV showing us the DVD of our choosing. After more than a century of unbridled textual and biblical criticism, the scriptures have been reduced to a medical school’s cadaver. Through the wielding of various “isms” and ideologies like scalpels, the great story of creation-fall-redemption-consummation has been dissected, rendered into isolated, scattered oddments of times and mindsets lost to us—their self-assured contemporary interpreters.

With the work of the Holy Spirit in official theology now largely confined to liberating our Id, wherever we find our “natural selves” reflected negatively in the Bible there is sure to be a seminary professor, a bishop, a priest, a bestselling theologian to dismiss the troubling vision with a novel, tangential, or simply illogical interpretation. In an age of pharmacological solutions to just about everything, American theology has become an awesomely efficient dispensary of spiritual coping mechanisms, sedatives lulling us into easy self-acceptance, and laxatives relieving us of uncomfortable guilt.

All of this can get the seeker of a real encounter with a real God pretty depressed. But all of this has happened before. Over and over again in Exodus through Numbers, God meets with an earlier version of the same thing from His people: mistrust, grousing, and rejection. No wonder a lot of people find these books hard to take. When the true creed of many is some form of “Follow Your Bliss,” the idea that we do not know what is best for us is simply unacceptable. Marcion’s old heresy of turning the God of the Old Testament into a mean, forbidding, cruel, lesser divinity when compared to the kindly, permissive, and oh-so-affirming New Testament Deity becomes the clear choice, even if that choice goes unspoken.

However, if the reader of Exodus comes to the text with a bit less self-affirming smugness and rather more openness of mind to observed reality, a different message may be perceived. What is striking is not human frailty, selfishness, or cussedness, but Divine patience. Like a good parent, God lets the people feel the consequence of their choices—at times in severe ways indeed. But the point is not that the biblical text shows God’s wrath with humans bent on self-destruction: it is that God does not finally let them do it. Rather than simply getting rid of the lot and picking someone else, God puts up with them and draws them on towards a new relationship at Sinai. This, rather than the more obvious story of human folly, is the really astounding part.

As one surveys the contemporary Episcopal Church, the Exodus portrait of a greedy, bored, and venial people readily emerges. Energetically gathering extra helpings of manna by digging into financial reserves when the demographic shoes begin to pinch, mistrusting the promise of God found in its spiritual patrimony, and like a disgraced televangelist “re-inventing” itself with new rites culled mostly from self-help glitterati, the Episcopal Church lurches from one fantasized fix for its ills to another. Untroubled by the fact that the pseudo-radical fixes don’t really fix, the Church’s leadership continues the unending but increasingly hidebound experiment unabated. The anti-institutionalism of the last generation will only be satisfied, it seems, when there isn’t a Church to worry about any longer.

Today’s lesson from Exodus does, however, give us a clue as to what to do in such times. In a season of spiritual vacuity those who cannot stomach a diet of delusion must, like Aaron, place the testimony of God’s provision before them as a witness that there is truth, there is reality, there is hope after all. Much the same as the jar of manna placed “before the Lord,” the individual parishes or other communities within our Church must gather up the fragments of Christian truth and Anglican witness left after decades of revisionism and associated amnesia.

As we journey through our own Wilderness of Zin—the intellectual, moral and liturgical wasteland left to us—we must keep that jar of manna before us. It will remind us that God does provide provision, hope, and renewal in times of trial and unfaithfulness. That jar is present wherever the Eucharist is celebrated as a participation in the Paschal mystery, rather than an exercise in the futile search for relevance. That jar is present when Episcopalians study the Scriptures as a living encounter with a living God, as opposed to accumulating proof-texts for their private opinions deriving from secular sources. That jar is present when mission and outreach is done not to show how insufferably enlightened we are, but to share the joy, the knowledge, the Life given to us in Christ Jesus, the Lord of Life, who is the True Bread from Heaven, and who alone will satisfy our deepest cravings.

Until we get to what Exodus calls a “habitable land,” a place where communion across cultures and ages in the Church is valued once more, it will be up to those leaders and communities with vision and courage to bear carefully that jar along the way to our next appointed Sinai, that rendezvous with the God who has always been there in spite of our aggressive and willful forgetting.

Collect for Friday in the Second Week of Easter

Grant, O Lord, that we may so live in the Paschal mystery that the joy of these fifty days may continually strengthen us, and assure us of our salvation; through Jesus Christ your Son our Lord, who lives and reigns with you and the Holy Spirit, one God, for ever and ever. Amen.

Posted by Brandon Filbert at 1:47 PM

Email ThisBlogThis!Share to TwitterShare to FacebookShare to Pinterest
Labels: Church in the World, Daily Office, Scripture Commentary, Through the Church Year