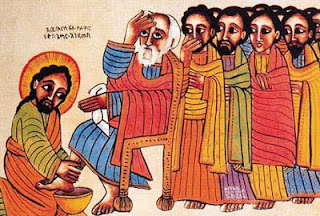 Shocking Work and Food for Disciples

One of the two “mandates” (from which we get the word “Maundy”) given to us this day by Jesus is to love one another as he has loved us. To demonstrate this in concrete terms, he proceeded to do the unheard of: to wash his disciples’ feet. As anyone who has spent time in a nursing home knows, the care of feet is not for the faint-hearted. Now, as then, this is not work people are lining up to do. It is often demeaning, taking a person down from any thought of being significant. Foot washing was totally inappropriate for a Rabbi, and totally appropriate for the Messiah.
In the Maundy Thursday Liturgy, the foot-washing ceremony can be taken a number of ways. Frequently today, one hears of parishes where members wash each others’ feet. This, on one level, seems to be a living out of Jesus command that we do exactly that. There is a sort of ritual literalism here that appeals to our era’s ideological predilections, especially a kind of liturgical egalitarianism.
But the older custom was for the celebrant to lay aside the cope or chasuble and to wash the feet of 12 persons selected from the congregation. This, too, has a certain literalism about it (especially when some parishes limit the recipients of the rite to men); but it—like its modern, egalitarian alternative—has something to teach.
The celebrant, here as at the time of Communion, is in persona Christi—in the person of Christ. By washing the feet of those selected, we see the story of discipleship articulated in action very clearly: Christ takes up the way of servitude, demonstrating servant leadership in its rawest form. But this way of being is never “from the grass roots up,” in the sense that Christians in some way “do” ministry on their own initiative or in their own way. It is always—always—given to us at the hands of Christ. This is one of the reasons for the traditional way of enacting the Maundy. It must start with Christ. The celebrant is not the “keeper of ministry,” but is the icon in this action of Christ giving ministry to His disciples then and now.
This is the same principle that stands behind the celebrant being the first to receive the Holy Sacrament at the Communion. Some Episcopal clergy—quite in violation of the Prayer Book rubrics—have taken up the peculiar practice of receiving at the end of Communion, often from a lay person. This seems to be done in the spirit of a hoped-for humility or a desire to express some sort of egalitarianism. But, in fact, it serves mostly to reinforced the notion that our worship is essentially human-centered, rather than a Diving Gift, wherein the celebrant receives from the True Host--Christ, the Great High Priest--and then proceeds to share with others what has been personally received (this is also a very physical and clear expression of how doctrine is supposed to be received and transmitted in the Church...but that is another post).
In our day, the meaning and power of liturgy to convey the totality of Divine presence and ordering has largely been overcome by a kind of political sentimentality, one relentlessly driving home the human and egalitarian rather than an integrated divine-human mystery.
This is seen, par excellence, by the unquestioning rush to push—even demand—communion of the unbaptized. The rationale for this usually places some slight focus on a tendentious reading of Scripture (certainly, it has nothing in common with how the Church has understood the Eucharist from the start), but the major selling point is the sense that “all are welcomed,” or (in more edgy parlance), a “radical hospitality.” It is a remarkably, even brutally, un-nuanced understanding of the Holy Mysteries.
But washing feet or receiving Christ’s Body and Blood are, no matter current trends, work and food for disciples, not passive onlookers or uncommitted visitors. Both of the mandates given this day are shocking, profound, and decisive. They require a commitment to follow Christ and His Way, not the way of this world. They are not tools for hospitality but gifts for fellow servants. Finally, they require an openness to a never-ending mystery that cannot be reduced to simple formulae or slogans. They must be received as gifts in a new life that has been given from the Lord of Life itself once and again, or they become more furniture in a religious museum of amorphous, surface, and trivial "spirituality."
Posted by Brandon Filbert at 6:32 PM