The Conception of the Blessed Virgin Mary: Thoughts on the mindset of receiving the mystery of redemption 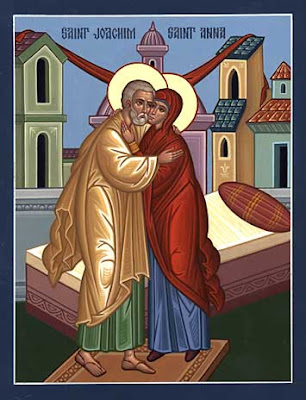 Today celebrates the Conception of the Blessed Virgin Mary. For Roman Catholics (and some Anglicans subscribing to this doctrine) it is a celebration of the Immaculate Conception—wherein the effects of Original Sin are washed away from Mary at the point of her own conception, thereby not putting Christ (who is without sin) in direct contact with humanity in its fallen, sinful state. As a point of Dogma, this teaching is unique to the Roman Catholic Church.

While not an official teaching of the Anglican tradition, elements of it may be found in classical Anglican documents, along with many a hymn and carol referring to The Blessed Virgin as “blameless.”

The origins of this feast, however, have rather more to do with traditions (not found in Scripture, but in early Christian legend) about Mary's parents: Ann and Joachim (commemorated in the Church on July 26).

Childless and elderly, they represented the barren state of humanity separated from God by the gulf of sin. Like Elizabeth and Zechariah, the conception of their child was sign of a coming change, an engulfing of our condition by God's love, redeeming it from within. The Feast of the Conception of the Blessed Virgin Mary is in its origins a harbinger of God's work to return us to our true destiny as children of God. Detailing the exact nature of Mary's conception, though certainly miraculous, was not the chief aim of this day. It was about the way God was bringing the Mystery of Salvation to pass.

One of the characteristics of truly Anglican theology is a resistance to over-definition. That characteristic is sometimes called “Anglican reticence.” This can be used in faithless and destructive ways, of course, but at heart it is an extension of the Early Church’s mindset, which reveres both revelation we have been given—and the nature of the mystery before which we stand.

The cycle of feasts associated with the Theotokos (God-bearer, as the Early Church came to call her) are primarily connected to the restoration of our human nature in Christ. Today’s feast is filled with an almost unspeakable joy that God invites us into the very process of our redemption. While only God can renew what has been damaged, only we can give assent to that process.

At the Annunciation, the Theotokos was the first person to say “yes” to this restoration of broken humanity; but, even that moment had been prepared for by God. Thy mystery of our salvation is deeply connected to the synergy between God’s grace and human response. We can never tell how that synergy is being prepared or worked out. The feast of the Conception is part of that understanding and mindset, that attitude towards faith and life. It is cause for celebration, and cause for renewed openness to God’s redemptive work in our lives, and in the hidden lives of others.

Collect for the Conception of the Virgin Mary

Almighty and everlasting God, you lowered yourself to raise our fallen race by the childbearing of blessed Mary; Grant that we who have seen your glory manifested in our humanity, and your love perfected in our weakness, may daily be renewed in your image, and conformed in the likeness of your Son, who lives and reigns with you and the Holy Spirit, ever one God, world without end. Amen.
Posted by Brandon Filbert at 10:51 AM