They could not speak, yet they bore witness to Christ: The Feast of the Holy Innocents 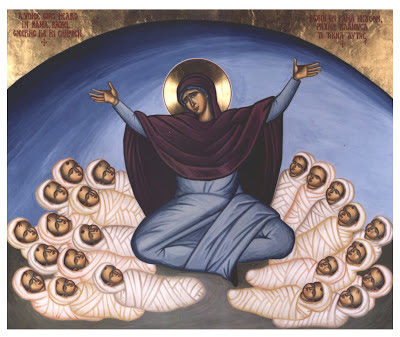 What follows is a portion of a sermon from an early Church Father commemorating the slaughter of the Holy Innocents. For many people learning about this Holy Day, it seems both incongruous and somehow wrong to put such a searingly awful event in the midst of the Twelve Days of Christmas. For us, Christmas has largely become an exercise in middle-class sentimentality rather than a season celebrating the totality of God’s embrace of our condition in the Incarnation. But, for catholic Christianity from the start, this event has been remembered and put front-and-center in our liturgical life. This is because of how seriously the Church has always taken the issue of Christian witness and the value of  innocence.

The Holy Innocents were massacred because they might have been Christ—a rival king to a nervously-despotic Herod. This story has analogues all around us. Recent events in Syria, for instance, show that the barbaric insanity of despotism remains alive and active in our own day.

In our own land, we have recently endured the horror of young schoolchildren murdered in a calculated fashion by a young man apparently motivated in part by the fear his own autonomy was about to end. Like Herod long ago, he chose to kill innocent children as part of a bid to exercise the God-like power of life and death.

The painful truth is that innocents are being murdered privately, publically, legally, and illegally all over the world all the time. It is a horrible fact of our world from which we must not turn away.

The author of the sermon below (Bishop Quodvultdeus of Carthage, obit. Circa AD 453) lived after the great organized Imperial persecutions of Christianity. He shared with many the understanding that martyrdom is the result of a confrontation between the Truth of the Gospel and the lie of sin. He looks at the Innocents as the first victims in this conflict, seeking to give their sorrowful deaths a dignity and purpose found in the Gospel’s final triumph over sin and death on the Cross and in the Resurrection.

In so doing, he draws one of many links between Christmas and Holy Week/Easter for us—for all the central mysteries of our faith are part of one great event of Salvation. Bishop Quodvultdeus is not trying to minimize the horror or the suffering in the story of the Innocents (and neither must we), but he is putting that suffering in a context, the context of Christ’s love and ultimate victory.

Doing that work is something that Christians are privileged to do…but only with the greatest of care, for suffering and loss are not problems to be solved hurriedly, but wounds to be healed in the ways and on the schedules unique to each sufferer.

Perhaps most importantly, this sermon nourishes us, in the midst of the horrors of this world, in an important truth: God makes no compromises with evil, and neither may we. The Collect for this feast (found at the end of this post) puts this in direct terms as we pray to God. We must work with God to confront all that is ungodly, carnal, and destructive—both within us and around us in this world—so that the light of Christ shines brightly, and that the memory of these and other innocents may be honored before God.
+ + +

A tiny child is born, who is a great king. Wise men are led to him from afar. They come to adore one who lies in a manger and yet reigns in heaven and on earth. When they tell of one who is born a king, Herod is disturbed. To save his kingdom he resolves to kill him, though if he would have faith in the child, he himself would reign in peace in this life and forever in the life to come.

Why are you afraid, Herod, when you hear of the birth of a king? He does not come to drive you out, but to conquer the devil. But because you do not understand this you are disturbed and in a rage, and to destroy one child whom you seek, you show your cruelty in the death of so many children.

You are not restrained by the love of weeping mothers or fathers mourning the deaths of their sons, nor by the cries and sobs of the children. You destroy those who are tiny in body because fear is destroying your heart. You imagine that if you accomplish your desire you can prolong your own life, though you are seeking to kill Life himself.

Yet your throne is threatened by the source of grace, so small, yet so great, who is lying in the manger. He is using you, all unaware of it, to work out his own purposes freeing souls from captivity to the devil. He has taken up the sons of the enemy into the ranks of God’s adopted children.

The children die for Christ, though they do not know it. The parents mourn for the death of martyrs. The child makes of those as yet unable to speak fit witnesses to himself. See the kind of kingdom that is his, coming as he did in order to be this kind of king. See how the deliverer is already working deliverance, the Savior already working salvation.

But you, Herod, do not know this and are disturbed and furious. While you vent your fury against the child, you are already paying him homage, and do not know it.

How great a gift of grace is here! To what merits of their own do the children owe this kind of victory? They cannot speak, yet they bear witness to Christ. They cannot use their limbs to engage in battle, yet already they bear off the palm of victory.
+ + +

The Collect for the Feast of the Holy Innocents
We remember today, O God, the slaughter of the holy innocents of Bethlehem by King Herod. Receive, we pray, into the arms of your mercy all innocent victims; and by your great might frustrate the designs of evil tyrants and establish your rule of justice, love, and peace; through Jesus Christ our Lord, who lives and reigns with you, in the unity of the Holy Spirit, one God, for ever and ever. Amen.

Posted by Brandon Filbert at 11:32 AM