From teacher to teacher... 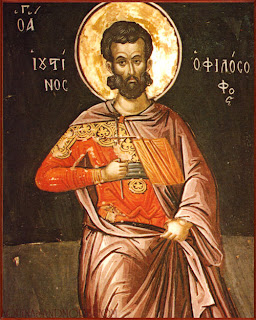 This year Justin the Martyr’s (obit. 167) commemoration is squeezed between the feasts of the Visitation and the Ascension, so there is very little time for considering him on his feast day. However, this exceedingly important early Christian thinker and witness deserves much attention.
Born in what today we call Nablus (in the Palestinian Territories) to Greek pagan parents, he became a well-read student of what we would call the Classical world, learning widely about all the major philosophies and religious systems of the time.
As his collect remarks, Justin went from “teacher to teacher,” as was the custom, gathering wisdom from many sources, but was never truly satisfied with any of them—until he met a Christian who explained how Jesus was the fulfillment of the teaching of the Hebrew prophets. Gradually, Justin came to know Christ not only as a Hebrew, but as the fulfillment of all the world’s search for truth and meaning. Justin had not encountered yet more words about truth from another teacher: he had come to know the Word of God Himself.
He became a Christian and set up a school of Christian Philosophy, eventually moving to Rome and engaging in scholarly debates with other teachers. It was a decisive moment in Christianity, taking the boldness and subtlety of St. Paul’s sermon on the Athenian Areopagus in Acts to the Imperial center itself, and there challenging the Pagan hold on intellectual discourse. So threatening did this become to the established system that Justin eventually was arrested on trumped-up charges (likely from a rival teacher bested in debate) and beheaded along with a number of his students. How many seminary students today would be willing to emulate their example, one might ask?
From Justin we learn many things: How early Christians thought about philosophy, interrelated with other viewpoints, worshipped, and viewed Christ’s mission to the non-Jewish world. Few writers in this period are more significant or wide-ranging.
We also see in Justin’s life the significance of an authentic spiritual search, and commitment to that search. Like our own day, second century Roman culture was a veritable bazaar of offerings in “spirituality,” mysticism, philosophy, and religious practice. Romans, like Americans, tended to collect various “options” in these areas, like shoppers in a mall laden with bags bearing the trademarks and logos of all their acquisitions.
But Justin saw this for what it was: hollow, trivial, and ultimately hopeless. He pointed out that in Christ humanity has been given its true dignity and purpose, and that the Gospel fulfills the good in all previous philosophies. Our own day is much in need of this insight. Whenever the Church grasps the power of the Gospel to speak to all people, its message radiates both power and challenge. However, the temptation to conform ourselves to the “spirit of the age,” collecting our own assembly of teachers and “options” remains near at hand. Perhaps the current decline of much North American Christianity is related to this.
On St. Justin’s day it is worth our time to reflect on how serious our search for truth is, how deeply we are drawing from the springs of God’s Holy Wisdom: Jesus Christ. Where have we traded the power, authenticity, and intellectual integrity this holy martyr knew and exhibited for the convenience, complacency, and cowardice of going from “teacher to teacher” to suit the diminished vision of our day?
Almighty and everlasting God, who found your martyr Justin wandering from teacher to teacher, seeking the true God, and revealed to him the sublime wisdom of your eternal Word: Grant that all who seek you, or a deeper knowledge of you, may find and be found by you; through Jesus Christ our Lord, who lives and reigns with you and the Holy Spirit, one God, for ever and ever. Amen.
Posted by Brandon Filbert at 9:09 AM