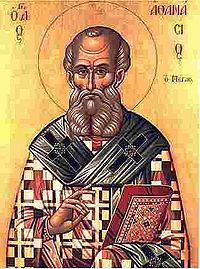 The Sunday after Pentecost is the Church’s annual celebration of the revelation of God as Holy Trinity. This is the essential, bedrock teaching of orthodox Christianity. Without it, there is no authentic Christian life, practice, or transmission of faith.
The Trinity imbues the Scriptures. At moments such as the Baptism of Christ, the Great Commission in Matthew, the High Priestly Prayer in John, or the conclusion of 2 Corinthians, it is quite evident. At many other moments in the New Testament (and foreshadowed by such events as the Creation narrative and Abraham’s visitors at Mamre in the Old Testament), it is less obvious, but no less present.
The Early Church accepted the concept of Trinity implicitly. As time went on, the doctrine’s more subtle points were explored and debated. One thing is consistent, though: false forms of Christianity almost always begin with a rejection of the Trinity, going on to substitute some other (often very unbalanced) teaching that dispels all mystery—asserting either an arrogant intellectual mastery or a destructive hedonism in the place of Revealed Truth.
Trinity Sunday is a profoundly joyful day. In a world so pervaded by lies and distortion, we have been given the Truth—a truth that invites not arrogance or complacency, but humility, awe, reverence, and worship. That is why on this day it is customary to offer that great hymn of praise—the Te deum laudamus—in solemn form at the conclusion to the Eucharist. We sing not because we understand everything, but because we are loved and love in return. That is the knowledge we prize: the love of the Trinity as Trinity, for us, and through us.
Below is a portion of a letter from the great African bishop Athanasius of Alexandria (circa 296-373) on the Trinity. St. Athanasius the Great was one of the decisive figures in Christian history, standing as he did against Imperial power, ecclesiastical convenience, threats of violence, times of exile, betrayal, and many other hardships, so that the orthodox and saving faith would be proclaimed. His words speak about the nature of the Trinity and the way that nature reaches out to us in our own mystical life of communion and service.
A letter by St Athanasius
Light, radiance and grace are in the Trinity and from the Trinity
It will not be out of place to consider the ancient tradition, teaching and faith of the Catholic Church, which was revealed by the Lord, proclaimed by the apostles and guarded by the fathers. For upon this faith the Church is built, and if anyone were to lapse from it, he would no longer be a Christian either in fact or in name.
We acknowledge the Trinity, holy and perfect, to consist of the Father, the Son and the Holy Spirit. In this Trinity there is no intrusion of any alien element or of anything from outside, nor is the Trinity a blend of creative and created being. It is a wholly creative and energizing reality, self-consistent and undivided in its active power, for the Father makes all things through the Word and in the Holy Spirit, and in this way the unity of the holy Trinity is preserved. Accordingly, in the Church, one God is preached, one God who is above all things and through all things and in all things. God is above all things as Father, for he is principle and source; he is through all things through the Word; and he is in all things in the Holy Spirit.
Writing to the Corinthians about spiritual matters, Paul traces all reality back to one God, the Father, saying: Now there are varieties of gifts, but the same Spirit; and varieties of service, but the same Lord; and there are varieties of service but the same Lord; and there are varieties of working, but it is the same God who inspires them all in everyone.
Even the gifts that the Spirit dispenses to individuals are given by the Father through the Word. For all that belongs to the Father belongs also to the Son, and so the graces given by the Son in the Spirit are true gifts of the Father. Similarly, when the Spirit dwells in us, the Word who bestows the Spirit is in us too, and the Father is present in the Word. This is the meaning of the text: My Father and I will come to him and make our home with him. For where the light is, there also is the radiance; and where the radiance is, there too are its power and its resplendent grace.
This is also Paul’s teaching in his second letter to the Corinthians: The grace of our Lord Jesus Christ and the love of God and the fellowship of the Holy Spirit be with you all. For grace and the gift of the Trinity are given by the Father through the Son in the Holy Spirit. Just as grace is given from the Father through the Son, so there could be no communication of the gift to us except in the Holy Spirit. But when we share in the Spirit, we possess the love of the Father, the grace of the Son and the fellowship of the Spirit himself.
Posted by Brandon Filbert at 6:47 PM