Too Close to Christ 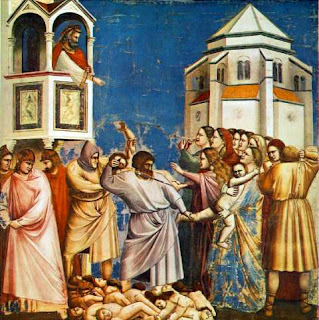 Yesterday was the (transferred) feast of the Holy Innocents. This day commemorates the massacre of the young boys in Bethlehem recorded in the Gospel according to Matthew (2: 16-18). A recent National Geographic article noted that there is no “independent” source authenticating this event, and discounted the possibility of it ever happening. The article was something of a “rehabilitation piece” for king Herod, lauding him for his achievements in statecraft and architectural splendor. Yet, the character of his life and what we know him to have done as part of his quest to maintain and expand his power is quite harmonious with the hideous act of violence recorded in the Gospel.

The Innocents were just that. They were children too young to know Christ, too young to know sin, too young to fight back. They were victims who looked enough like Christ to be killed. They ushered in a new era: the era of Christian martyrdom. Even though they did not consciously die as martyrs, they have been accorded this honor by the Church from very early on.

We hear much about the suffering inflicted on people in the name of religion, and it is surely a sad history. Yet, how much more suffering has been inflicted on innocent people in the name of power: state power, the power of personalities, the power of institutions (including religious), systems, and ideologies? Our Lord came to expose the futility and hopelessness at the core of this naked obsession with power. His Incarnation in Bethlehem as a result of an Emperor’s decree, his status as a refugee, and his ultimate suffering at the hands of the earthly power structures (both civil and religious, note) are a testimony to what at heart is wrong with the world “as it is.”

True power comes from God, and thus comes from the Love of the Holy Trinity – not the viciousness of fearful human actors. Only those who live in communion with this Love can live rightly with power, for they know the source and purpose of power. This understanding of power is at the core of the Gospel.

The Holy Innocents were but the first victims in this conflict between earthly power and the Gospel. The world, with its obsession… indeed, addiction… to power, sensed a threat and sought to extinguish this threat from the first moments. The Innocents remind all who would follow Christ that merely being like Christ is enough to earn the hatred of the World. As with the National Geographic article, the World remains enthralled by palaces, pleasures, and power. God has decreed that it is love and mercy that matter, though.

In the midst of our Christmas celebrations we must not forget this basic point of conflict; the battle is ultimately won by God on the Cross, but the Holy Innocents, too, are part of that might struggle. Let us not forget them or the many innocents who suffer to this day because the bear a resemblance to the Truth from Above in their vulnerability, fragility, purity, or gentleness. How much more blessed by God it is to be an innocent than one whose addiction to power has twisted us into the character of a Herod, whose achievements merit no memorial other than crumbling citadels and horrid memories!

We remember this day, O God, the slaughter of the holy innocents of Bethlehem by the order of King Herod. Receive, we beseech thee, into the arms of thy mercy all innocent victims; and by thy great might frustrate the designs of evil tyrants and establish thy rule of justice, love, and peace; through Jesus Christ our Lord, who liveth and reigneth with thee, in the unity of the Holy Spirit, one God, for ever and ever. Amen.

O almighty God, who out of the mouths of babes and sucklings hast ordained strength, and madest infants to glorify thee by their deaths: Mortify and kill all vices in us, and so strengthen us by thy grace, that by the innocency of our lives, and constancy of our faith even unto death, we may glorify thy holy Name; through Jesus Christ our Lord. Amen.

Posted by Brandon Filbert at 12:32 PM No comments: