"Come and See!" -- The God-given form of Evangelism 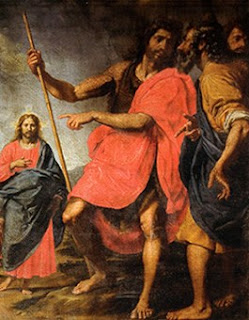 
The next day John again was standing with two of his disciples, and as he watched Jesus walk by, he exclaimed, ‘Look, here is the Lamb of God!’The two disciples heard him say this, and they followed Jesus. When Jesus turned and saw them following, he said to them, ‘What are you looking for?’ They said to him, ‘Rabbi’ (which translated means Teacher), ‘where are you staying?’ He said to them, ‘Come and see.’ They came and saw where he was staying, and they remained with him that day. It was about four o’clock in the afternoon. One of the two who heard John speak and followed him was Andrew, Simon Peter’s brother. He first found his brother Simon and said to him, ‘We have found the Messiah’ (which is translated Anointed).  (John 1:33-41)

November 30th is the Feast of St. Andrew the Apostle. He was one of the first disciples Jesus called to him, and is perhaps better known to us for being St. Peter's brother than for being himself. Some people just have such things happen to them.

The Early Church tradition says that after the Gospel record of Jesus' Ascension and the coming of the Holy Spirit at Pentecost, Andrew eventually made his way through Greece and into what would now be called Ukraine. He became the patron saint of Greece and Russia, as well as the Apostolic "founder" of the Patriarchate of Constantinople. A later tradition says that he was martyred by being crucified on a cross shaped like the letter X.

Much as these later stories have to suggest to us, what is far more significant for the  Christian today is how Jesus shares faith in the above-quoted passage from St. John.

Instead of the anxious, complicated, and (frankly) often manipulative strategies found in many courses, books, and studies today, Our Lord awaits the moment when two of John the Baptist's followers begin to show interest in knowing more about the one their teacher has pointed out as the Lamb of God. When these two interested-but-still-uncertain people decided to learn more, Jesus turns to them and asks them this simple but profound question: "What are you looking for?"

Note that Jesus didn't try an salesmanship on them; neither did he engage in complex dialogue. He only asked them to describe their goal. Instead of nervously trying to "sell" a "product" or a lifestyle, he put the ball firmly in their court and asked them about their own thoughts and desires from a position of peace and clarity.

Much may be written about the question of how to share the Christian faith in our time and place, but one thing that should be basic to any such discussion is the fact that Christianity is not an ideology or a product to be sold, pushed, or wheedled for. It is a gift that God the Holy Trinity alone gives. Jesus, in peacefully inquiring about the motives and purposes of those who would follow him, is showing that the Gospel proceeds from a radical state of mutuality at the get-go.

The response to Jesus' question is an interesting one. The two disciples ask to see Jesus' lodgings. No deep theological questions, no urgent demands to know his position on the "issues" -- instead, they want to see what sort of person this Jesus is, and they want to spend time with him. That's all. This well expresses the kind of simplicity and openness authentic searching in spiritual matters has about it.

And what does Our Lord do with this opportunity? Does he try to captivate these seekers with personality or showmanship? Does he give a lengthy preface to what they can expect to find, robbing them of their own experience and conclusions? Or, does he hurriedly attempt to modify his home to his perceptions of their taste? Nope. Not a bit of it. He only says: "Come and see!" They did, and stayed all the way to tea (ok, four o'clock). 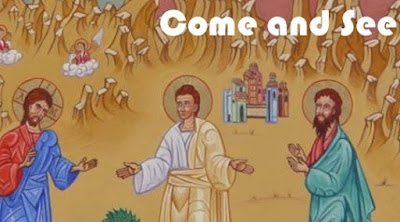 What they experienced in that time of conversation and (presumably) hospitality with Jesus we cannot say for certain, but the effect on at least Andrew was instant. He seems to have gone immediately to see his brother Peter with the urgency of an express train so he could  share what he had found. From that moment, Andrew knew what he had received and what he was now able to give. Like Jesus, he could speak with clarity to those around him who were ready to hear what he had to say.

This is authentic evangelism. It allows all involved to be honest and open. It asks for no commitment when none is being sought, and it does not involve marketing or "technique." It is both authentically human and also recognizably divine. It does not follow a magic pattern or a clever system; indeed, such a form of evangelization is far from being reduced to mechanical regularity. Rather, it is completely based on relationship and sharing what one has freely and appropriately.

St. Andrew's Day is a good day to reflect on how each of us views the task of sharing the faith that, St. Peter says "is in us." If, as St. Paul reminds us in Romans, the Word is "very near us," indeed "on our lips and in our heart," the opportunity to share faith will be both natural and easy. If the faith we have is more or less a program for official initiation into a spiritual bureaucracy, then it will be complicated and laden with burden. It will also turn most people away in our current North American climate.

No Christian is ever to allow the opportunity to share faith to slip by, any more than we would the opportunity to save a life from a sudden accident or injury. But, how we share the faith is every bit as important as how we might save a life.  There have been many cases where unwise rescue efforts have only succeeded in harming those being saved, and there are many, many cases wherein people trying to "save souls" have really just steamrollered them instead.

The Collect for today asks God for the grace to follow Jesus without delay and to bring those near to us into His gracious presence. This shows the relationship between our own inner discipleship and our outer capacity to share faith well. When our lives are turned to God and open to his grace--not closed off and focused on our own desired outcomes--we are alive to the Divine Will for us and others. It is perhaps only such evangelization that is indeed worthy of the name: Good News.

The Collect for St. Andrew's Day:
Almighty God, who gave such grace to your apostle Andrew that he readily obeyed the call of your Son Jesus Christ, and brought his brother with him: Give us, who are called by your Holy Word, grace to follow him without delay, and to bring those near to us into his gracious presence; who lives and reigns with you and the Holy Spirit, one God, now and for ever. Amen. 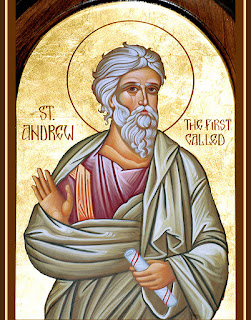 Posted by Brandon Filbert at 1:56 PM No comments: 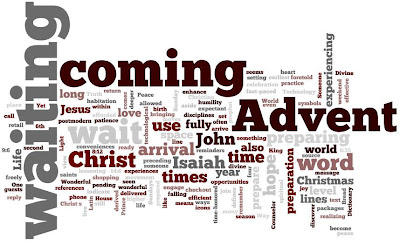 Posted by Brandon Filbert at 12:00 PM No comments: