St. Leo the Great on the Annunciation & the Mystery of our Salvation 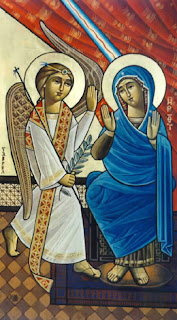 The Feast of the Annunciation falls on March 25, but because of Good Friday and Easter Week taking precedence this year, this Major Feast was transferred to today, April 4. During this week we have a beautiful time of contemplation of this great Mystery of Faith.

In this letter written by St. Leo the Great (c. 400-461 AD, feast day Nov. 10), we see the beauty of God’s work to save us and raise us to our true nature…a nature not defined by sin, sickness, or death but life, love, and dignity.

Attempts to “demythologize” the Annunciation or other Mysteries of Salvation by various groups (in and outside of the Church) sadly miss the point: what we are given in Christianity is not a way to “cope” with the world, but a form of life that looks through and beyond the false and distorted vision assumed by de-spiritualized humanity and already (through the Holy Spirit) lives in the “now” of God’s eternal life.

With the Annunciation, the Incarnation Cycle of the Church Year has begun. It is, once more, an opportunity to reaffirm our belief in God’s redeeming the world from the inside, with the very “stuff” of Creation, in an action of love without bounds.

Lowliness is assured by majesty, weakness by power, mortality by eternity. To pay the debt of our sinful state, a nature that was incapable of suffering was joined to one that could suffer. Thus, in keeping with the healing that we needed, one and the same mediator between God and humanity, Jesus Christ, was able to die in one nature, and unable to die in the other.

He who is true God was therefore born in the complete and perfect nature of a true human being, whole in his own nature, whole in ours. By our nature we mean what the Creator had fashioned in us from the beginning, and took to himself in order to restore it.

For in the Savior there was no trace of what the deceiver introduced and we, being misled, allowed to enter. It does not follow that because he submitted to sharing in our human weakness he therefore shared in our sins.

He was born in a new condition, for, invisible in his own nature, he became visible in ours. Beyond our grasp, he chose to come within our grasp. Existing before time began, he began to exist at a moment in time. Lord of the universe, he hid his infinite glory and took the nature of a servant. Incapable of suffering as God, he did not refuse to be a human, capable of suffering. Immortal, he chose to be subject to the laws of death.

He who is true God is also truly human. There is no falsehood in this unity as long as the lowliness of humanity and the pre-eminence of God coexist in mutual relationship.

Collect of the Feast of the Annunciation:

Pour your grace into our hearts, O Lord, that we who have known the incarnation of your Son Jesus Christ, announced by an angel to the Virgin Mary, may by his cross and passion be brought to the glory of his resurrection; who lives and reigns with you, in the unity of the Holy Spirit, one God, now and for ever. Amen.
Posted by Brandon Filbert at 7:27 PM No comments: