The Persistence of Memory & St. Aidan 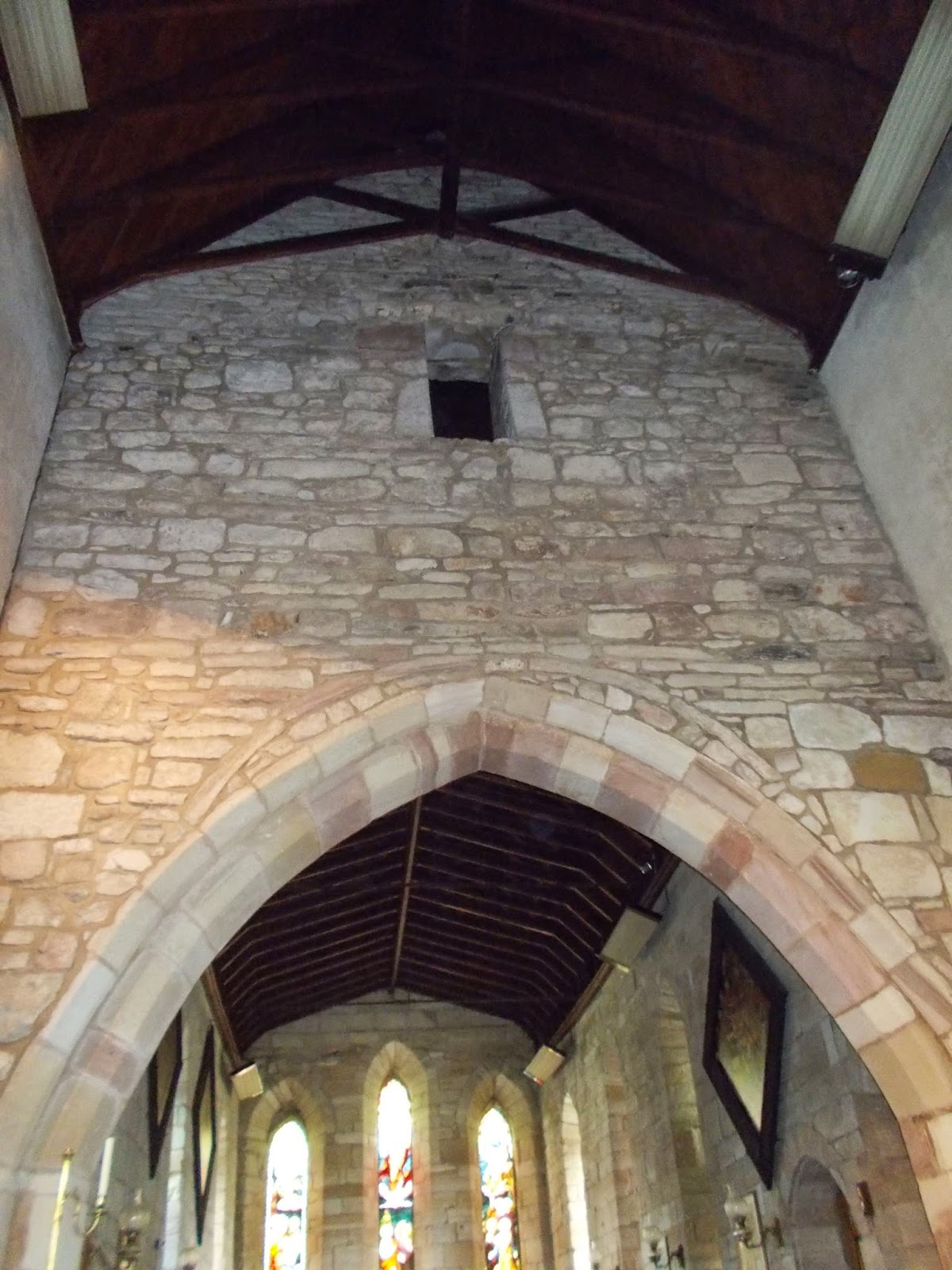 Tomorrow is the annual commemoration of St. Aidan of Lindisfarne: Bishop, Monastic, and Missionary. I have long read about this great figure in Celtic & (by extension) Anglican Christian history, but a few weeks ago I had the blessing to be on Holy Island itself, and to celebrate the Holy Eucharist at the altar of the parish there, along with the members of our youth pilgrimage group. The Vicar of St. Mary’s Church (Dr. Paul Collins) was very gracious and kind to let me do this.

The story is that St. Aidan was actually the leader of the second mission sent out from Iona to Northumbria at the invitation of King Oswald—the first mission (under Cormán) having been a total failure, with that missionary saying the locals were too stubborn to be converted. Such a statement always suggests the wrong person has been sent to carry out God’s work. This does happen, alas, in the Church.

Aidan, however, turns out to have been a completely different story. St. Bede records that Aidan had a form of sharing the Gospel according perfectly with the people and environment. His was apparently a much more invitational model, overcoming their wariness with a patient love and a holy manner of life. In a short while, the Gospel gained a foothold not only among the wealthy (who had every reason to support Oswald’s efforts), but among the poor and those enslaved. It really is a remarkable story about which we need to know more in our own day. It is likely that only such a form of evangelism will have real effect in a place such as Oregon, say.

While on Holy Island, I had a number of a experiences that will stay with me for a long while. A couple of them spoke to me in considerable depth.

One was the necessity for having that “holy island” in all our lives—a place to go that is cut off from everything else for a least a time each day, and longer on the occasion of prolonged retreats. Lindisfarne is an island for only part of the time…at low tide one can drive to it via a low causeway, or (more anciently) walk along the marked pathway. The value of having a place and a time for reflection and respite, for consolation and communion is easily lost in the ebb and flow of electronic modernity. While on Lindisfarne I was recalled to the truth of my own life that having space and silence—on a scale far larger than I have had in recent years—is essential for me to be the person God made me to be. Looking out across the water to St. Cuthbert’s little island, a retreat-within-a-retreat, was a convicting gift. 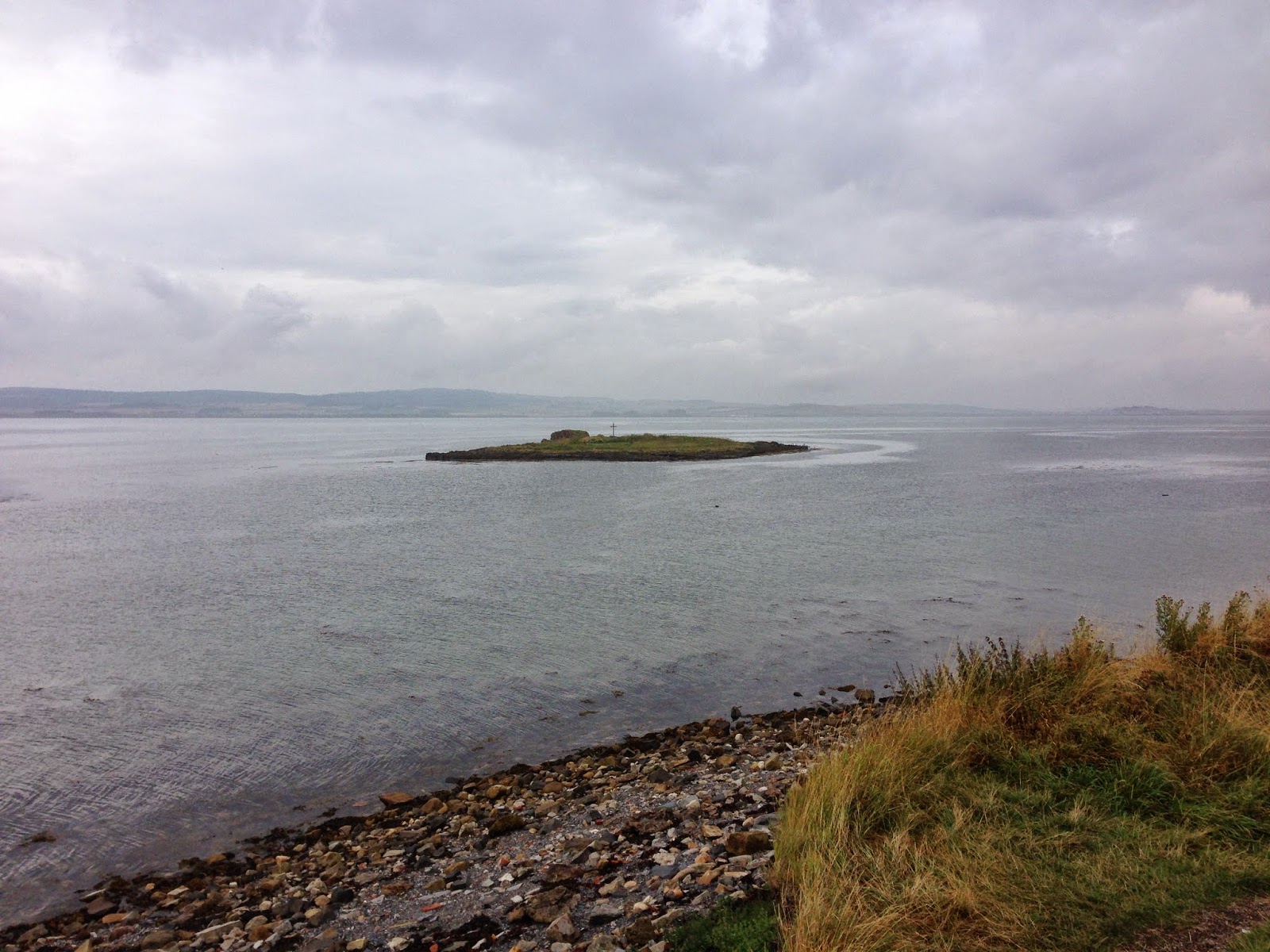 Another aspect of the journey to Holy Island that still plays upon my mind is the value of memory. Remembering is for Christians an essential skill. It does not mean a sentimental look back or an anachronistic revivalism. Rather, it is an entrance into the constant Presence of God, the Eternal Now of the Divine Life.

On Lindisfarne—as in all holy places—there is a special opportunity to do this. The parish church, with its Saxon elements in the chancel wall, its Norman altar area, and its current Great War Memorial Altar, all in close proximity to the place where Aidan and Cuthbert based their ministries (and perhaps where Aidan is buried) reminds one of this. For Christians the present is always soaked in the victory won on the Cross and celebrated eternally in the Heavens, reaching into this moment and giving it substance, courage, power, and love.

Just now in much North American Christianity, we are infatuated with electronic communication (such as the kind I’m using here). We are tempted to put a great deal of emphasis on the medium rather than attending to the substance of the message.

Focusing on the medium is not, in itself, bad. Because Cormán didn’t know the “medium” of missionary work in Northumbria, his work failed. But medium must convey a worthy message in Christianity, and I sense our era is more interested in “coolness” than in substance and the saving kerygma of the Gospel. This goes for most types of Church in America, not only my own. Aidan combined a great sense of the proper medium for sharing faith while at the same time not compromising the message of that faith at all.

The faith we live and share necessarily requires an ongoing conversation about its history. Looking at the Great War Altar at St. Mary’s made me aware of how much each part of the Church needs to be about this work. An unacknowledged history is both an under-used resource and an open invitation to getting bitten by the past. Great Britain, for instance, is going through a prolonged meditation on the meaning of WWI just now, and it is very important for them to do so, as that war and its results still play an outsize role in modern life. The sad and secular character of modernity, with its self-medication (in various forms, acknowledged or not) is the result of the attempt to fill the void left by turning from God. This turning is the result of a long historical chain, an important part of which is the industrialized slaughter of millions in modern warfare. We need to know this part of our story if we are to disentangle it from the Evangel. It is impossible to be effective evangelists if we do not understand well what we are carrying along with the Gospel in our psyches. This is an important aspect of what it means for Christians to remember. 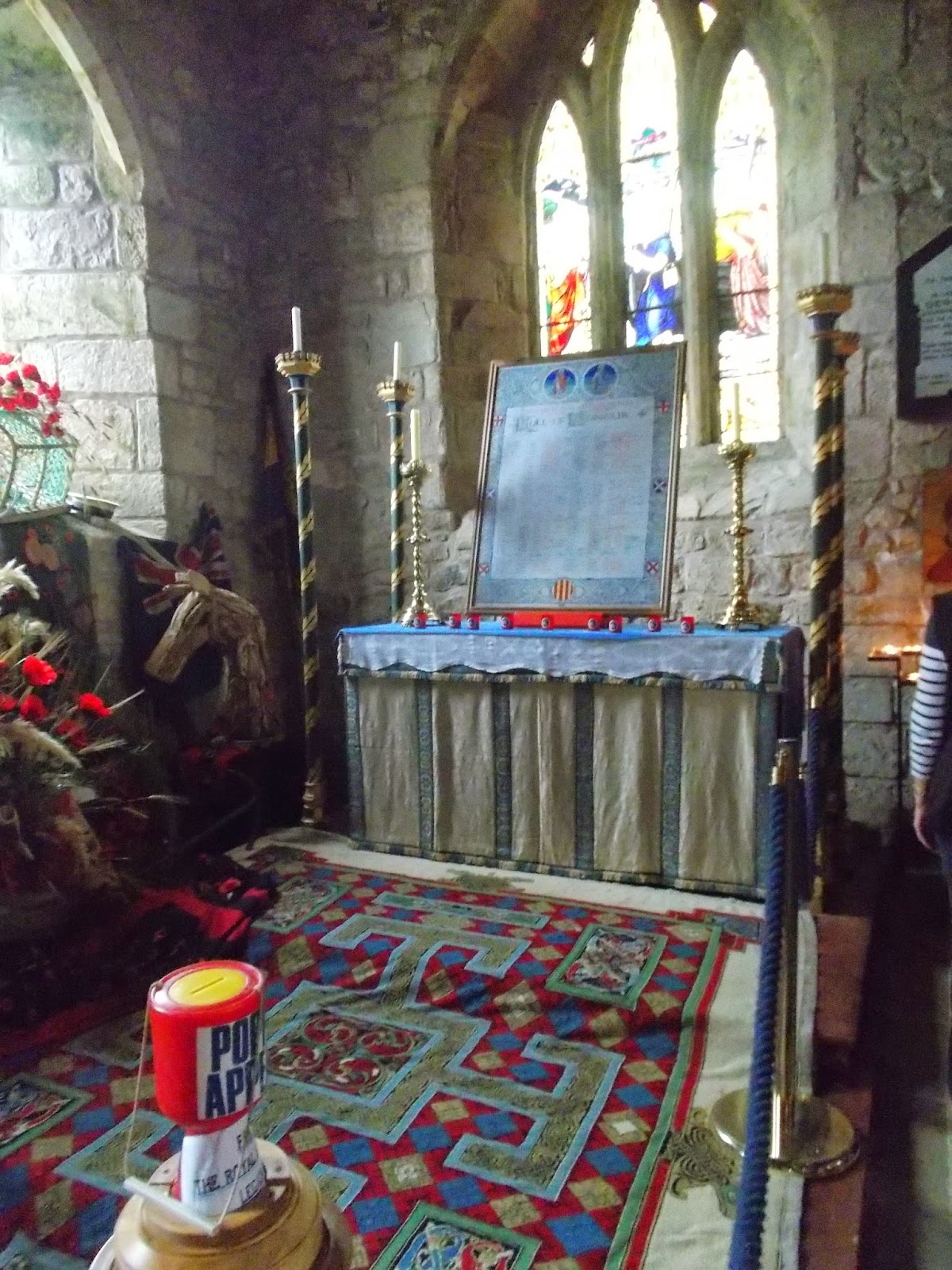 Being able to remember in the full sense of that word, and to have time and space in which to listen to God and thus participate in his work of mission in and through us was a gift of being on Holy Isle. As the waves gently lapped along the beach that day, with the seals playing and the air heavy with salt and memories, I rejoiced that Aidan’s witness continues to reach around the globe, perhaps with new vitality and significance today. 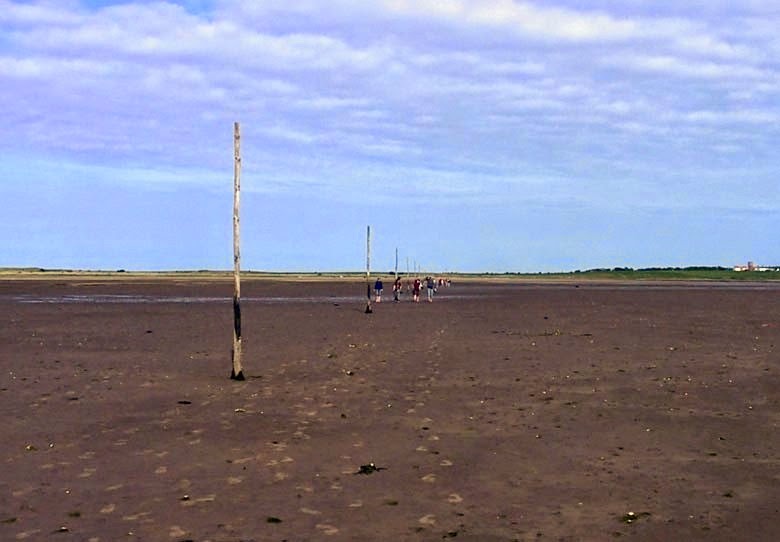 A prayer of St. Aidan

Leave me alone with God as much as may be.
As the tide draws the waters close in upon the shore,
Make me an island, set apart, alone with you, God, holy to you.

Then with the turning of the tide
prepare me to carry your presence to the busy world beyond,
the world that rushes in on me
till the waters come again and
fold me back to you.

Posted by Brandon Filbert at 12:50 PM No comments:

Email ThisBlogThis!Share to TwitterShare to FacebookShare to Pinterest
Labels: Church in the World, Missio Dei, Through the Church Year 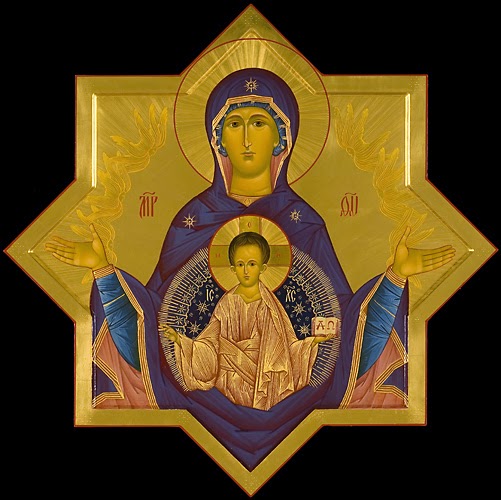 A Hymn of Mary

As a star its kindred ray,
Mary doth her Child display,
Like in nature:
Still undimm'd the star shines on,
And the Virgin bears a Son,
Pure as ever.

Lebanon his cedar tall
To the hyssop of the wall
Now conformeth:
Word on high, he doth assume
Human flesh in Mary's womb,
God incarnate.

No longer then delay;
Doubt not what legends say;
Why be cast away,
A race forlorn?
Turn and this Child behold--
That very Son of old
In God's writ foretold,
A Maid hath borne.

V. The holy Mother of God has been exalted.
R. Over choirs of Angels, into the heavenly kingdom.

This hymn expresses beautifully the character of the Church’s devotion to the Holy Theotokos. Her purity, peace, and trust set an example for us of what faithful discipleship is like. Her role as the essential human collaborator with God cannot be downplayed or diminished without deeply disfiguring the Christian faith, for she points the way for all of us: we must collaborate with God’s grace in order to bear Christ into the world in the unique way each of us is able. This is the way in which we "incarnate" God's work in and through us. Mary is the icon of the Church's response to its Lord, from the Annunciation through the Pentecost, and beyond.

The Anglican Tradition has found the balance in honoring St. Mary the Virgin as the “First among the Saints” and yet remaining firmly grounded in Scriptural language regarding her witness and role. We are blessed to bear this message into the world on her great Feast Day, to honor her every day in our prayers to God, and—perhaps most significantly—to undertake to live as she did: faithfully, with courage, and always bearing forth Christ Jesus in our words, actions, and prayers.  In so doing, we join her in the eternal song of praise to God offered by all the Faithful through the ages.

The Collect for the Feast of St. Mary the Virgin

O God, you have taken to yourself the blessed Virgin Mary, mother of your incarnate Son: Grant that we, who have been redeemed by his blood, may share with her the glory of your eternal kingdom; through Jesus Christ our Lord, who lives and reigns with you, in the unity of the Holy Spirit, one God, now and for ever. Amen.
Posted by Brandon Filbert at 7:20 PM No comments: