Pursing justice, confessing the truth...and dying for it

This day has been made holy by the passion of the blessed apostles Peter and Paul. We are, therefore, not talking about some obscure martyrs. For their voice has gone forth to all the world and to the ends of the earth their message. These martyrs realized what they taught: they pursued justice, they confessed the truth, they died for it.

As you are aware, Jesus chose his disciples before his passion and called them apostles: and among these almost everywhere Peter alone deserved to represent the entire Church. And because of that role which he alone had, he merited to hear the words: To you I shall give the keys of the kingdom of heaven. For it was not one man who received the keys, but the entire Church considered as one. Now insofar as he represented the unity and universality of the Church, Peter’s preeminence is clear from the words: To you I give, for what was given was given to all. For the fact that it was the Church that received the keys of the kingdom of God is clear from what the Lord says elsewhere to all the apostles: Receive the Holy Spirit, adding immediately, whose sins you forgive, they are forgiven, and whose sins you retain, they are retained.

Rightly then did the Lord after his resurrection entrust Peter with the feeding of his sheep. Yet he was not the only disciple to merit the feeding of the Lord’s sheep; but Christ in speaking only to one suggests the unity of all; and so he speaks to Peter, because Peter is the first among the apostles. Therefore do not be disheartened, Peter; reply once, reply twice, reply a third time. The triple confession of your love is to regain what was lost three times by your fear. You must loose three times what you bound three times; untie by love that which your fear bound. Once, and again, and a third time did the Lord entrust his sheep to Peter.

Both apostles share the same feast day, for these two were one; and even though they suffered on different days, they were as one. Peter went first, and Paul followed. And so we celebrate this day made holy for us by the apostles’ blood. Let us embrace what they believed , their life, their labors, their sufferings, their preaching and their confession of faith.
From a sermon by St. Augustine of Hippo

Today’s feast is, historically, one of the great commemorations of the year. It celebrates two of the central figures in Apostolic Christianity, and reminds us both of the absolute centrality of the Apostolic Faith in the Church’s ministry and our role in knowing and sharing that faith today. The cult of consumerized Christianity has led in our day to a hyper-individualized religion, where Christians put the emphasis on their own opinions rather than on participation in the revealed truth of God. This, in turn, leads to paralysis in the Church’s witness, much as did Peter’s denials of Christ until the moment when Jesus released him from the shame and guilt by the side of the Sea of Galilee. The faith given Peter and Paul alone had the power to allow them to "pursue justice, confess the truth, and die for this truth," as St. Augustine so aptly put it. Whenever churches or individuals try to substitute anything--anything--for that faith, paralysis sets in and we become focussed on lesser, sinful things.

In every era it is the same: only by living in the authentic teaching of the Apostles does Christianity have the true “Good News” of Christ to share; and only that “Good News” has the power to work miracles of divine love in our world. Today celebrates that faith, that relationship, that love in the person of Sts. Peter and Paul…and our sharing in their company through baptism, the holy mysteries, the words of Scripture, and a right faith.

A note on this day falling on Friday: Historic Anglican and catholic practice always treats this as a feast day. The current BCP does not make this (or many other important Holy Days) an exception to the Friday devotion rule. It seems a strange omission for the Episcopal Church to fail to honor great Feasts with a relaxation of the usual Friday devotion. Perhaps it is a sign that few of those in leadership actually take the Prayer Book-mandated Friday devotion seriously enough to see the conflict. In any event, I would encourage returning to the ancient practice of treating this as a day for prayer, thanksgiving, and feasting.

Collect for the Feast of Sts. Peter and Paul, Apostles
Almighty God, whose blessed apostles Peter and Paul glorified you by their martyrdom: Grant that your Church, instructed by their teaching and example, and knit together in unity by your Spirit, may ever stand firm upon the one foundation, which is Jesus Christ our Lord; who lives and reigns with you, in the unity of the Holy Spirit, one God, now and for ever. Amen.
Posted by Brandon Filbert at 9:05 AM No comments: 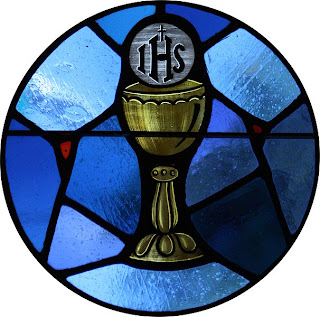 When unable to attend the Holy Eucharist

The Book of Common Prayer reminds us that if one is unable to actually consume the consecrated bread and wine due to extreme sickness or disability, the desire is enough for God to grant all the benefits of communion. When being present at a celebration of the Eucharist is absolutely impossible, this act of prayer and meditation can provide the means by which you can associate yourself with the Eucharistic Action and open yourself to God's grace and blessing.

Blessed be GOD, X Father, and of the Son, and of the Holy Spirit. And blessed be his kingdom, now and forever. Amen.

Collect
Let the power of the Holy Spirit come upon me, O Lord, I pray you: to cleanse my heart and defend me from all adversities. Through Jesus Christ our Lord. Amen.

Read the following lessons from scripture, or read the appointed lessons for the day

Epistle (Revelation 3:20)
Listen! I am standing at the door, knocking; if you hear my voice and open the door, I will come in to you and eat with you, and you with me.

The Gospel (St. John 15:5)
I am the vine, you are the branches. Those who abide in me and I in them bear much fruit, because apart from me you can do nothing.

In your own words, pray for your needs, for those of others, for the peace of the world, and for the Church. After offering these intercessions, continue with the

Act of Contrition
O God, I confess my sin against you, the author of life and giver of all good things, and I humbly repent. Especially, I confess.... Forgive me for Jesus’ sake, and grant me the grace to walk in your ways hereafter. Amen.

Act of Reception
In union, dear Lord with the faithful at every altar of your Church where the Holy Mysteries of your blessed Body and Blood are being celebrated and received (and remembering particularly my own parish and those worshiping there), I long to offer you praise and thanksgiving for creation and for all the blessings of this life, for the redemption won for us by your life, death, and resurrection, for the means of grace and the hope of glory (and particularly for the blessings given me...).

I believe that you are truly present to your people in the Holy Sacrament. And since I cannot now receive you sacramentally, I pray you to come spiritually into my heart. I unite myself to you, and embrace you with all the affection of my soul. Let nothing separate me from you; let me serve you in this life until, by your grace, I come to your glorious kingdom and unending peace. Amen.

Come Lord Jesus, dwell with your servant in the fullness of your strength, in the perfection of your ways, and in the holiness of your spirit, and rule over every hostile power in the might of the Spirit, and to the glory of the Father. Amen.

The Body and Blood of our Lord Jesus Christ preserve my body and soul unto everlasting life. Amen.

And may the peace of God, which passes all understanding, keep my heart and mind in the knowledge and love of God, and of his Son Jesus Christ my Lord: and the blessing of God Almighty, the Father X the Son, and the Holy Spirit, be with me now and always. Amen.

Act of Praise and Thanksgiving
X Blessed, praised, hallowed, and adored be Jesus Christ on his high throne of glory in heaven, in the most Holy Sacrament of the altar, and in the hearts of his faithful people. Amen.
(Based on various sources, esp. the new St. Augustine's Prayer Book)
Posted by Brandon Filbert at 6:29 PM No comments: