A Preface to Holy Week, Chiefly on Time 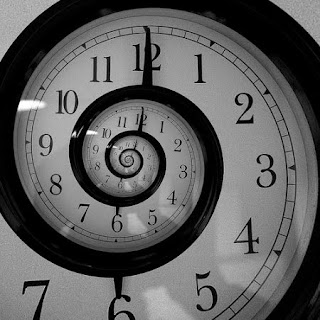 This year I hope to do some writing about the meaning of Holy Week for the Christian and the potential Christian alike. But before doing so, I want to take some time to reflect on… time.

The 4th dimension always holds much fascination for me. While we can measure it off with clocks and calendars, it is unlike linear, planar, or three-dimensional reality. With these, one can go back and forth or around, surveying something once covered again, or skipping some things in order to move on to something else. With time, we cannot go back and we can only advance (under normal circumstances) at one speed. With time we are, in essence, caught in the Now.

For Christians, though, time has a less concrete character. We all know that, whether one is a believer in God or not, there is a certain elasticity to time: some things seem to go with all the lassitude of the line at the DMV, others hurtle past with the avidity of the time it takes to eat a freshly-baked chocolate chip cookie. Yet for followers of Christ, time not only can bend: it can be pierced and broken entirely, its boundaries rendered non-existent. One such time is at the Holy Eucharist, when Christ’s promise that “whenever you do this,” he will be present with us makes any day Maundy Thursday, any meal the Last Supper (and the Banquet at the consummation of All Things, too). Another such time is Holy Week.

Beginning with the eve of Palm Sunday, Christians of the liturgical sort go into the deepest foundations of time and faith. We set aside large chunks of our usual time-based obligations (work, family, meals, play, hobbies, &c.) so the Holy Spirit can take us from being spectators to participants. During this week, we go from symbolism (the notion that something stands for something else… the “once removed” level of living we so often settle for) to the reality of concrete events themselves. The Palm Sunday procession is not a symbolic event; it doesn’t stand for something else. It is that “something” itself. During the sacred Triduum of Maundy Thursday, Good Friday, and Easter Sunday, we don’t re-enact ancient magical rites: we enter into the Mystery of an already-accomplished and operative reality of God’s victory over sin and death – and our sharing in that victory. The difference is enormous.

Most people seem to approach spiritual matters from the point of view of magic. The approach taken is that of quid pro quo: I do/pray/give something in order to get something I want. This thinking infects American Christianity in a staggering array of ways, from the “Prosperity Gospel” movement in conservative denominations to “cause Christianity” in many progressive church groups. The “magical Christian” follows some version of the Gospel for the same reason the Wiccan or the superstitious person follows his or her ritual practices: they conjure up a desired result. If that result doesn’t follow, then there must have been something wrong with the ritual, spell, conjurer – or, perhaps the whole “system” is void. Like people who damage their metabolism jumping from one fad diet to the next rather than dealing with underlying emotional/spiritual/life-style issues, such “spirituality surfers” often do much injury to their souls in their sorrowful journey.

During Holy Week the meaning of Liturgical Time is made very clear. In the rites of these liturgies, we are not “making” anything “happen.” No magic is desired or sought.

When walking in the Palm Procession, participating in the dramatic reading of the Passion Gospel, having one’s feet washed at the Maundy, venerating the Cross on Good Friday, sharing in the New Fire or the proclamation of the Resurrection at the Great Vigil, we are re-experiencing what has been done, what is eternally true. It is a spiritual fact we celebrate; there is nothing “symbolic” about it. The distance between Christ’s earthly ministry and our own day collapses to nothing. The underlying unity of these things is revealed. As promised, when we “do this,” Christ is present in the fullness of his love, his redemptive offering, his resurrected power.

Each Sunday, each celebration of the Holy Eucharist, then becomes a sharing in the truth, the event we experience first-hand in Holy Week. All earthly time is then transformed, reshaped into a divine time even as “ordinary” matter has been revealed to be holy and extraordinary through God taking flesh in Christ. The unique flavor of time we as Christians are supposed to have – but which we all too often forget in our secularized form of Church life today – is renewed and restored during Holy Week. This points to the essential nature of the observance of these great days. Without it, we gradually become more and more conformed the world of symbolism, theory, and a weakened “spectator Christianity.”

Since this is not magic, it isn’t enough to know that others are observing the liturgies of this holy season. For this week to be what it can be – what it must be – something other than a calendar’s notation is required. It begins, in a sense, with our decision to participate. Whenever that is, be it on Palm Sunday or at the Vigil itself, when the heart yearning for the Life only God can give joins itself to the message of the Gospel, Holy Week has come and another soul has experienced what St. Paul calls “the fullness of time,” a time that is Now and Forever in Christ and his Church.

Posted by Brandon Filbert at 5:36 PM