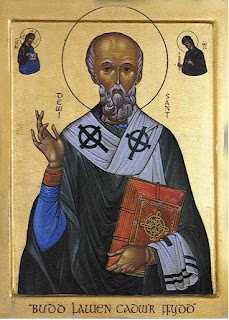 Some years ago I had the great blessing of being part of a pilgrimage to Wales. There we encountered the spiritual legacy of many holy saints. Some, such as St. Brynach (commemorated April 7), were entirely new to me. Others were known to me, but the significance of their witness was revealed in new ways. Perhaps the best example of this was St. David, locally known as “Dewi Sant,” whom the Church commemorates the first day of March.
David (c. 500-589) was a Welsh native, and the most significant figure known to us from the early Welsh Church. He was a Bishop and a monk, and his was a Celtic monasticism: rigorously ascetic but also extraordinarily compassionate; deeply orthodox and pastorally gifted. His monastic community became the basis for the cathedral church in the city of St. David’s, Pembrokshire. It was to this holy place that our pilgrimage came one sunny Welsh day.
We came to pray for God's continued guidance, and to venerate Dewi Sant’s relics, seeking his intercession as a native son and one who knew this coast--physically and spiritually--like the back of his hand. Any true pilgrimage is about being open to God's purposes on the journey. What would being in  "Ty Dewi" ("David's House") bring about?
Connections, disconnection, similarities, and communion, it turned out. It was a rare experience for us as Oregonians, where Christianity is a very recent arrival, to be in direct contact with another Christian whose witness was made a millennium-and-a-half ago. The austere and rigorous form of Christianity St. David practiced seemed so removed from our modern American version, with its insecure and often childish emphasis on personal comfort and affirmation. Yet, there were some important commonalities: David lived in a time when Christianity was struggling against the forces of paganism. We in the Pacific Northwest have more experience with this than many others in the U.S. today. St. David also lived in a place of mountains and ocean, rain and wind, removed from the center of attention. We all found this part of Wales very familiar in geography and “feel.”
And then there was the cathedral itself. As Anglican Christians, we immediately felt familiar with the worship, the piety, the “tonality” of St. David’s Cathedral. Though it was so different from our own modern worship setting in externals, the ancient faith of that holy man and his faithful community was not really foreign to us at all. We were “distant relations” come to town, but relations still. The meaning of a global Communion, though scarred by centuries of conflict and contemporary belligerence, spoke to us still… as did the Communion of Saints, made vivid and tangible to a group of Gore-Tex clad pilgrims a long way from their earthly home, but closer than ever to their heavenly destination.
Holy David, pray for us.
Posted by Brandon Filbert at 3:11 PM