Living Stones in the Temple of God 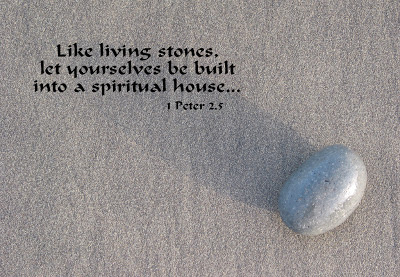 Come to him, a living stone, though rejected by mortals yet chosen and precious in God's sight, and like living stones, let yourselves be built into a spiritual house, to be a holy priesthood, to offer spiritual sacrifices acceptable to God through Jesus Christ. (1 Peter 2:4-5)

We come today to a feast, a celebration, that is increasingly important for the Church on earth to mark and reflect upon, for it speaks of a vision, an understanding that is totally revolutionary and overturning for the modern person. This revolution, unlike so many in recent times, is not one that brings bloodshed—in fact, it ends the need for the shedding of blood, the blood upon which the powers of this world continually gorge themselves. But our era is uniquely challenged not to compromise this revolutionary vision. I want to explore this vision with you today.

There was a time when all the world was holy; when it glowed with the presence of the divine. The whole earth was a temple of God. There was no place where one could go that was beyond God, because there was no desire to imagine such a place. This is the original condition of humanity as portrayed in Genesis. It is the condition that was broken when our first parents are shown to choose their own communion with themselves, with creation apart from God, with their own will, rather than the holiness all around them. In doing this, the Temple of God’s Universal Presence was destroyed, and they are revealed to exist in a barren land, a waste that no longer perfectly reflects unity with God, but estrangement, alienation, and bitterness.

But God left the memory of the earth as Temple deep in the human heart. We were hungry for it, though we no longer knew what it was for which we hungered. Humanity’s many attempts to achieve its own holiness—so often characterized by the need to shed human blood—is the record of all the vain attempts at forcing that half-understood memory into reality.

It was God alone who could bring that memory into concrete form. And the first step in this direction was the creation of the Ark of the Covenant, which journeyed with the people in their travels, until finally it came to rest in the Temple at Jerusalem. It was here, we are told, that God chose to place his Name. This very personal point of access between God and his people allowed humans to see that the Creator of all things desired to renew contact with the world that had rejected him.

The Temple became the sign of God’s presence to the Hebrew people, and the prophets spoke of how that presence was not only for this one chosen people: it was for the world’s final redemption and reconciliation with its God. The Temple of God’s Universal Presence was coming.

That true Temple came in a most unexpected way. It arrived in the body of an infant, born of a virgin. Just as the Ten Commandments were inscribed by no human hand upon the stone of the tablets, so the Son of God came into this world “not by the will of the flesh, nor by the will of humans, but of God,” through the body of the Blessed God-Bearer, Mary. Christ Jesus became the fulfillment of the Temple. He became the living Temple who gathered up all people into himself and offered them to the Father in loving compassion. He taught all who would listen that through him, everyone would have access to God. Through Christ Jesus, the long story of alienation and rejection could end: the Temple of God’s  Universal Presence was made real once again, and multitudes came to him. They remembered what had been forgotten, dug up what had been buried, rejoiced in finding what had been lost. His invitation became their freedom.

But that offering of love was accomplished only by his rejection at the hands of humans still drunk with the ambition to justify themselves apart from God. The Passion, Cross, and Tomb of Christ were the very means by which this Temple was brought to its perfection. As St. John says, it was Christ’s enthronement, his glorification. Only through this could the truth be firmly and finally proclaimed. The Temple made with stones had fulfilled its purpose: the Temple made with divine love had come. The first Temple had been a house of prayer for all nations, but the Temple of Christ Jesus was the revealing that all the earth, all the human person, all the Creation is the Temple of God for those who have united their will with Christ’s will.

On the day of Resurrection, the era in which we live—the era of the Church—commenced. Christians may no longer think of holiness as being foreign to the world: it is for us always to be expected, to be looked for, to be experienced. Whenever we see another person, we are called to expect Christ to be there. Wherever we encounter Truth, we are in the presence of God. We are those living stones spoken of by the Apostle Peter, being fashioned into a living Temple that offers spiritual sacrifices—not the blood of others, but the sacrifice of holy lives, lives freely offered to God and to the others around us. This Temple is not built of cold, hard stones; it is formed of compassionate hearts. We are “chosen and precious” to our God when we allow ourselves to be those “living stones.”

But today we face a world in which this forgetting of holiness is almost complete. In spite of two thousand years of the Church, the world has aggressively sought to forget and reject is vocation to holiness. All around us, God is rejected. He has become an outcast. In his own world, he has become homeless. He stands shivering, despised, rejected. Our world today says: “We do not need you; we never knew you.” It denies all sense of holiness, and treats the earth, the skies and seas, the trees and animals with industrial contempt. Most of all, it continues the ancient religion of blood, wherein innocents, children, women and men are fed into the machine of killing and destruction: some in places hidden from view, others in state-sanctioned, public venues. The world's quest for its false imitation of holiness is unrelenting.

All who choose to stand with God must accept that we, too, will be rejected by the world precisely because we have remembered who we are, casting off the lies that surround us. Our vocation, our revolutionary vision at this time, is to remember: to remember that the world was created very good by a God who has never forgotten us. We remember that each particle of Creation reflects that goodness, each human in some way is a holy Temple of God wherein God’s desire for our communion with him may be found. And this brings us to this Feast of Dedication.

The collect for this day reminds us that it is in this place, this consecrated place whose dedication we celebrate today, that God promises to share with us in this alienated world the gift of communion. Our churches are not fortifications but inns, places where humans and God may dine together, where God’s healing—like the Good Samaritan’s loving care administered in an inn—may gradually bring us to health and wholeness. The church buildings are the places where Christians say to God: "If no one else desires you, we do—come here and be with us."

And so we share in this Feast of Dedication knowing that God is here, and that, as when Christ was healing in the Temple, we who are blind and lame—in so many ways—may approach him without fear. This is the homeless shelter for a rejected God and a rejected people, both of whom are precious in each other's sight in this holy place. And, if we are precious to each other here, then we are precious to each other outside this building. But, this is the refuge in our world where the truth about God, the truth about ourselves, and the truth about the Creation is always taught. Each Eucharist is a remembrance, a making present, of that eternal truth in Christ.

It is not the building, of course, but the People gathered in the power of the Holy Spirit that constitute the Church. Yet, the building, the ground, the altar—all these are beachheads in the invasion of this world by the Kingdom of God. They are landing-sites for the triumph of God’s love which reaches out beyond the building, beyond the institutional Church into the world. Through us, God is re-enchanting the world, rebuilding the Universal Temple of God’s Presence one compassionate heart at a time. In this, we are that holy priesthood making spiritual sacrifices acceptable to Christ. Only such worship is truly possible in this Temple.

This being so, we are free to look at the entire world once more as the great Temple of God’s Presence—though it cannot see this for itself. We see it coming, dawning, much as the holy women who came to the Tomb in the near-darkness of Easter morning first saw it. It dazzles, it sometimes frightens, but it tells us that what we remembered and yearned for so dimly is true: God has never forgotten us and is with us always—here, yes, but everywhere, forevermore.

Now, shining with the radiance of God's holiness as living stones in his Temple, share this vision in actions as well as words.

Collect for the Dedication of a Church
Almighty God, to whose glory we celebrate the dedication of this house of prayer: We give you thanks for the fellowship of those who have worshiped in this place, and we pray that all who seek you here may find you, and be filled with your joy and peace; through Jesus Christ our Lord, who lives and reigns with you, in the unity of the Holy Spirit, one God, now and forever. Amen.

Posted by Brandon Filbert at 10:42 PM