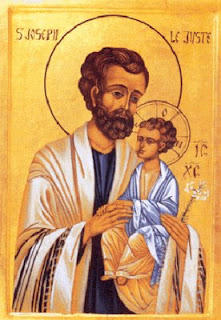 Tomorrow is the feast of St. Joseph, foster-father of Our Lord. In our rush to think of St. Joseph in theological terms, we sometimes forget that he was a living, breathing human. He was a man in a world where men were in control of just about everything…and yet this man had to dwell with the fact that he had almost no "control" of anything when it came to Jesus.

In dealing with this, Joseph put more trust in dreams and earnest observation than he did in his era's usual round of being a foster-father and head of the house. He confronted situations that were shocking and dangerous in faith and determination so as not simply to do anything, but to do what God called him to do. He was a model in a man of the kind of patient, listening faith that so often is ascribed to women. In this, he shows that men and women are both called to the same basic thing: faithful discipleship.

But he was also a husband. The Scriptures give us very limited insight into this matter, but we do see him as a provider, a worker, a companion, and a protector. He was, as the Italians say, Mary’s “caro sposo,” her dear husband. I have an icon of St. Joseph that calls him just this, and that comforts me a great deal. I'm a husband, too, and that is a sacred calling. I fail at it quite often, but St. Joseph makes very clear the standard and the tools for this Christian vocation.

The Gospel tells us that Joseph was a just man; he was unwilling to act hastily or out of his own raw emotion. He considered things deeply and prayerfully. He placed decisions before God. He did not turn his back on anyone whom he had pledged to love and support. I believe this to be part of what makes him very relevant to our own day and situation.

We live in a time when commitment is seen almost as a weakness. In the face of so many choices, we like to think that keeping our options open is the greatest good. But Joseph shows us that justice requires much more: a commitment to what is right, what is compassionate, what is true—even when that choice appears foolish or dangerous.

I believe we need to reaffirm the significance of Joseph as someone faithful, patient, just, and loving in the midst of things beyond ordinary human comprehension. In our era, with its tendency to focus only on answers, it is tremendously significant to look upon the lives of those who have shown that the answers often only come by living faithfully with the moment, with the task God has given us. St. Joseph shows us that great things come from such faithfulness.

Collect of St. Joseph
O God, who from the family of your servant David raised up Joseph to be the guardian of your incarnate Son and the spouse of his virgin mother: Give us grace to imitate his uprightness of life and his obedience to your commands; through Jesus Christ our Lord, who lives and reigns with you and the Holy Spirit, one God, for ever and ever. Amen.

Posted by Brandon Filbert at 6:03 PM