Faithfulness amidst the Ruins: Alcuin and Us 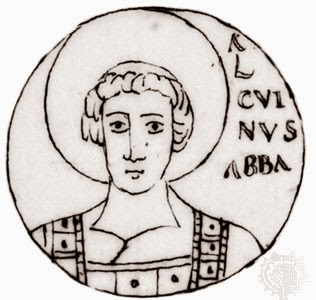 The Collect for the Commemoration of St. Alcuin of Tours
Almighty God, in a rude and barbarous age you raised up your deacon Alcuin to rekindle the light of learning: Illumine our minds, we pray, that amid the uncertainties and confusions of our own time we may show forth your eternal truth; through Jesus Christ our Lord, who lives and reigns with you and the Holy Spirit, one God, for ever and ever. Amen.

Today is the annual commemoration of that marvel of a dark age: the deacon, teacher, and abbot Alcuin. Hailing from York in England, he eventually became Charlemagne’s “first minister” and a figure of immense importance in the saving of classical knowledge and the spread of Christian teaching and practice.

In so many ways, Alcuin was the flower of the tradition of Bede: learned, genial, tactful, focused, practical and yet grounded in the Gospel’s vision of a world already breathing the air of the Kingdom. Along with all this, Alcuin understood the value of integrating the best of the Classical world’s knowledge with the Church’s life of prayer and service. To him and his disciples we owe much of the work to preserve and disseminate the thought of the ancient Roman world. Thus, Alcuin represents that teaching of Our Lord, wherein wise householders bring forth things “old and new” from the treasure-house of faith.

Perhaps most important to me on this day is Alcuin’s persistence in his ministry while dealing with a world that was violent, crude, carnal, and deeply compromised as it struggled with half-converted leaders, pagan systems of brutality, and inherently unjust ways (often cloaking themselves is supposed sanctity). Then—as now—being faithful to Christ required the careful negotiation of a broken world’s ensnaring traps while working to show forth the Holy Gospel. It means being in, but not of, the world.

At one point in his time at Charlemagne’s court, Alcuin returned to his native England in order to try and convince King Æthelred to manage his affairs in a wiser manner. In a sense, Alcuin never lost sight of his homeland, and remained attached to it not only ecclesiastically but personally until the end. When Æthelred chose not to respond to Alcuin’s urgings, Alcuin left and never returned. There is a limit to what efforts we, with the limited time we are given, must needs expend on those who will not listen. This, too, is an important dimension of what it means to be faithful stewards of the Mysteries of Christ.

Our day, with all of its fancied sophistication and privilege, is ever more revealed as an era of brutality, carnality, and (in the words of the collect) rudeness, a word that comes from the idea of being uncultivated. In so many areas—from our relationship to the Creation, to human trafficking, to consumerism and its opening the door to more human degradation in the name of “choice”—we are living in a culture of barbarism, where ordinary people uncultivated in either philosophy or theology unquestioningly assent to a system based on strength rather than truth. Like the time of Charlemagne, we labor as Christians to bring light into a darkened world. That work is hard and at times we feel completely overwhelmed by the world’s embrace of sin rather than holiness.

People like Alcuin provide a message of hope and determination, however. Their utter single-mindedness about the Gospel is a witness to us all when we grow faint, calling us to put our trust not in the rulers of this world—even such imposing figures as Charles the Great—but in the One Lord who already has the victory. In the light of that victory we labor on, knowing that our vindication and solace is found in faithfulness to the Prince of Peace even as we are called to minister in the haunts of darkness and human ignorance.

Part of the epitaph on Alcuin’s tomb breathes this clear-eyed, sober, and yearning desire to know God with true integrity in the midst of the passing vanity of the world:

It can well serve as a motto for each of us who seek and love the true wisdom of God in a “rude and barbarous age.” Like Alcuin, may we be used by God the Holy Trinity for the work of building up a more truly just, holy, and godly world.
Posted by Brandon Filbert at 8:34 AM