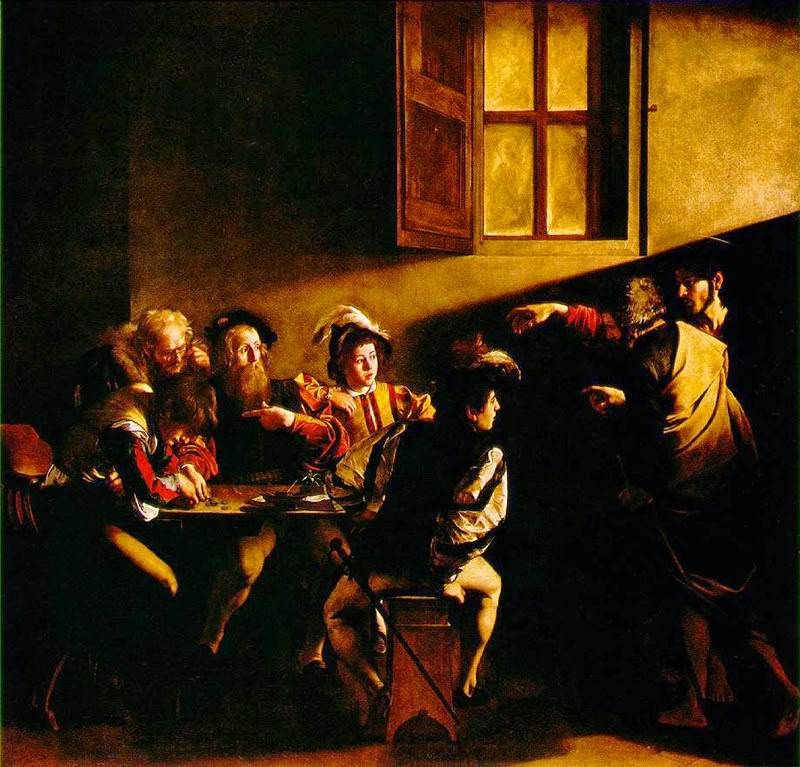 As Jesus was walking along, he saw a man called Matthew sitting at the tax booth; and he said to him, "Follow me." And he got up and followed him. And as he sat at dinner in the house, many tax collectors and sinners came and were sitting with him and his disciples. When the Pharisees saw this, they said to his disciples, "Why does your teacher eat with tax collectors and sinners?" But when he heard this, he said, "Those who are well have no need of a physician, but those who are sick. Go and learn what this means, `I desire mercy, not sacrifice.' For I have come to call not the righteous but sinners." Matthew 9:9-13, NRSV

Today we recall the life and witness of St. Matthew the Apostle and Evangelist. His story is one that many of us can identify with, and apt in our current cultural climate.

Matthew was involved with the business of collecting tax for the Roman Empire. This was handled in something akin to a franchise system, with local tax collectors taking a cut over-and-above the assessment required by Rome. The system was brutal and morally degrading. What Matthew must of heard (and likely seen) would curl one’s toenails.

But, Matthew apparently had a number of gifts. He was very likely literate and could deal not only with figures but organizational matters. He also appears to have been a person who understood networks of people. These were useful skills in his trade.

When Jesus called him to leave the “tax booth,” Matthew seems to have been more than ready. It meant a massive change in his life, probably both risky and deeply-desired at the same time. The very next sentence in the above description has Matthew holding a party for all of his fellow tax-collectors and other “non-persons” in order to introduce them to Jesus…the Jesus who crosses boundaries not simply for the heck of it, but in order to bring those who are lost back into the fold of God’s love and holiness. It is a scene of transcendent mercy and invitation…just the sort of inclusiveness we like to think Christianity is all about.

Jesus is remarkably clear about what is going on in the lives of these people. Yes: sin. This is degradation—the kind that binds guilty and ashamed people together as much or more than any amount of patriotism or civic-mindedness. Jesus has crossed the borders of sin and righteousness not to blur them, but to invite, redeem, heal, forgive, and restore. He wants us to share in his life of freedom, victory, and peaceful communion with the Father. This is not a banquet of the status quo. It is a banquet of radical new possibilities.

Following Jesus means making a choice for or against the invitation he offers. The text is silent about who or how many made that choice. Ultimately, that is God’s business, not ours. But the choice remains, and any authentic Christianity will always present the choice between continuing in a life of sin and self-destruction or getting out of that world by following Christ in the Gospel Way.

Indeed, entire types of occupations and life-styles were deemed unfit for Christians from the start. We often try to pretend there is a way to live with one foot in both worlds, but ultimately there is no such compromise (this is what the season of Lent is largely about). Jesus tells us elsewhere that we must be in but not of the world. Matthew and his friends got to find out exactly what that meant, and so must every generation of disciples.

This passage also points out something very important for the Church’s ordained leadership. Matthew must get up and leave one world in order to embrace the other. This means he must sacrifice his old life so he can embrace the new one. The party he had for Jesus was something like a cross between a birthday and a wake.

Following Christ as a deacon, priest, or bishop must necessarily involve costly sacrifice. If it does not, then it is unclear that a new life has been embraced and an old one discarded. Much of the authenticity and validity of Christian witness and ordained ministry is caught up with this issue. This is the “salt” Jesus speaks of that gives “savor” to the Church’s life. When we avoid this by trying to make ordained ministry convenient, or treat it as just another career to be “fit into” the rest of life, it not only won’t work, but does severe injury to the communities we serve as well as the clergy we ordain. This is something to think about not only at the beginning of ordained ministry, but all along. It is, of course, also true for lay people as well as the clergy.

There is no “one-size-fits-all” formula to sacrificial living; each of us will be called to a different form of it. However, St. Matthew’s day reminds us that such a claim is always made on the life and heart of the disciple, and that only by taking up that claim may we actually enter into the Mind of Christ. By doing so we are able to witness to a life, love, and power far beyond ourselves. That message shines through the pages of the Gospel according to Matthew, as we would expect from the memories of one who experienced a personal death-and-rebirth at the hands of the loving Lord Jesus.
Posted by Brandon Filbert at 2:00 PM