The Feast of St. Mary the Virgin—An Anglican Consideration 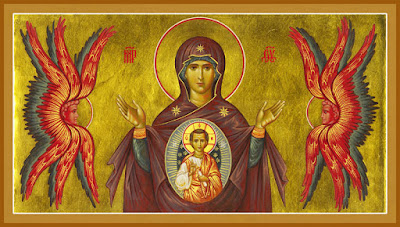 The Feast of St. Mary the Virgin on August 15th has a complex and varied history. Various parts  of the ancient Church commemorated St. Mary in different ways: some placed the focus on the Feast of the Epiphany, others (such as Rome) marked the Blessed Mother’s life with a commemoration in January. Still others focused on celebrating those events involving St. Mary in the Gospels. However, by the 6th and 7th centuries many parts of the Eastern and Western Church were keeping a special observance on August 15th. This date emerges out of the mists of antiquity. It may have originally been connected with the dedication of a church in St. Mary’s honor. As the years progressed, though, this day was generally associated with legends about St. Mary’s death.
Various traditions grew up over the years around the manner in which St. Mary entered the next life. Some spoke of her dying and burial, followed by a “taking” of her body, with only a sweet scent in her tomb left behind. This early understanding is found in today’s collect: “O God, you have taken to yourself the blessed Virgin Mary, mother of your incarnate Son...” Later on, the tradition of her assumption – body and soul – into heaven developed. This has, in Roman Catholicism, become a dogma of the Faith (though the notion that she never actually experienced physical death was firmly rejected by Pope John Paul II).
In the Eastern Christian Church, and in some parts of the Anglican Communion, this day is known as the “Repose” or the “Falling Asleep of the Virgin Mary,” using the Scriptural language of our death as Christians being a “falling asleep” in the Lord (I Corinthians 15:18). Understanding St. Mary’s Day this way focuses on her sharing with us in death, yet being brought before Christ in special honor for her being the birth-giver of the Lord.
The Church of England removed this commemoration from the Calendar at the time of the Reformation as part of a general downplaying of Mary’s significance. For the reformers, St. Mary had become too much of a focus of devotion for the faithful, obscuring Christ’s centrality; indeed, some reformers said she had become “a snare and an idol” to the faithful. Others (Such as Bp. Lancelot Andrewes) were less bombastic in their reaction, noting the Blessed Virgin’s centrality in the story of salvation, in the Scriptural account, and in the devotion of many parts of the Christian Faith from early times. One of the most influential Anglican Divines in previous generations (Bp. Pearson of Chester) taught in his Exposition of the Creed that Mary was conceived without original sin—a teaching very similar to the Roman Catholic doctrine of the Immaculate Conception. His writing on the subject was considered normative in Anglican circles from the late 17th century until the early 20th. Thus, there has always been a strand of Anglican devotion to St. Mary, patiently enduring through the Reformation and reasserting itself in the 19th century.


This feast was official restored to the Calendar with the current revision of the American Prayer Book.  The prayers and lessons used were adapted from the Church of South Africa’s commemoration. It is now listed as a Major Feast, along with those of Apostles, Evangelists, St. Joseph, St. Michael-and-All-Angels, and other like commemorations. Mary’s centrality to the Gospel story, her iconic expression of what Christian discipleship must look like, and the key role accorded to her by the ancient Church as Theotokos (“God-bearer;” see the reprinted part of the decrees of the Council of Chalcedon in the  BCP, p. 864) are all affirmed today. The balance known in Scripture and the Early Church has, thankfully, been restored.
The Collect for the Feast of St. Mary the Virgin
O God, you have taken to yourself the blessed Virgin Mary, mother of your incarnate Son: Grant that we, who have been redeemed by his blood, may share with her the glory of your eternal kingdom; through Jesus Christ our Lord, who lives and reigns with you, in the unity of the Holy Spirit, one God, now and for ever. Amen..

Posted by Brandon Filbert at 6:12 AM