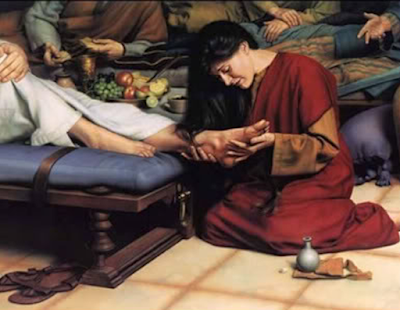 Six days before the Passover Jesus came to Bethany, the home of Lazarus, whom he had raised from the dead. There they gave a dinner for him. Martha served, and Lazarus was one of those at the table with him. Mary took a pound of costly perfume made of pure nard, anointed Jesus' feet, and wiped them with her hair. The house was filled with the fragrance of the perfume. But Judas Iscariot, one of his disciples (the one who was about to betray him), said, "Why was this perfume not sold for three hundred denarii and the money given to the poor?" (He said this not because he cared about the poor, but because he was a thief; he kept the common purse and used to steal what was put into it.) Jesus said, "Leave her alone. She bought it so that she might keep it for the day of my burial. You always have the poor with you, but you do not always have me." (From John 12, NRSV)

The Eucharist on Monday of Holy Week always has the Gospel reading from John about Christ’s dinner with Mary and Martha and Martha’s anointing of Jesus with the costly unguent called nard. This took place before Christ’s entry into Jerusalem, but is reflected upon by the Church on this day as a foreshadowing of his hasty burial on Friday evening, when the care usually taken with the body of a deceased loved-one could not be observed.

Judas objects to this lavish (and expensive) display of love. His motives were mixed we are told, but they sounded reasonable. What Martha did was to lay down about a year’s worth of wages in her brief, extravagant offering to Jesus. Judas uses precisely the logic urged upon us by many well-meaning people who cannot understand why art, beauty, treasure, and time should have such value in the Church’s worship and community life.

Jesus’s response shows the falsity of looking at human and divine life via the spreadsheet. Of course there is excess, and of course it is wrong to ignore the needs of the poor. But if worship is an expression of love and not only of intellection, then the sacrifice of precious gifts to God in worship has a rightful place in Christian life.

I once had a friend who spent time in an impoverished country where many people lived in slums. The local church, which was the center of much community life, was open all day and night. People came in and out of it all the time—lighting candles, saying prayers, interceding for others and asking the intercession of Christ and the saints for many different (and often desperate) situations.  The church building had mosaics of gold in it and many other richly-adorned objects, most very old. My friend grew outraged at the items in the church compared with the poverty and need in the lives of the people.

He told another mission worker about his feelings of resentment. This fellow worker had lived in the community for some time. He sympathized with my friend about the poverty in the community, but he had a surprising response to this notion.

“So, you think the church’s decorations could be better used, eh?” “You bet,” my friend replied. “They should sell all of that gold mosaic and those silver and gold vessels and distribute the proceeds to the poor.”

“And how long do you think that would last?” his co-worker asked. “Maybe a couple of years?”

“And what would they have after that?” the co-worker asked again.

“I don’t know” my friend said.

“I do,” the experienced mission worker said unenthusiastically. “They would have lost the one enduring place of real beauty and art in their town, and severed their link with the love and worship offered by their forbearers to the God who alone gives them hope. You would leave them in another form of long-term poverty.”

The ongoing debate about this matter is often posed as an either/or question, which it is not. But the point about that dinner in Bethany is this: love is at the heart of everything we are about as Christians.

Sometimes that love takes the form of delivering food to those in need. At other times it means changing inherently unjust structures in society. And, often it means putting aside all other projects and priorities and giving the very best of what we have and who we are to the God who created us and has loved us “to the end,” as St. John puts it.

Never let anyone tell you this is wrong. We have it from our Lord’s own lips.
Posted by Brandon Filbert at 5:01 PM