The Feast of St. Lucy and Christ's Light in Dark Places 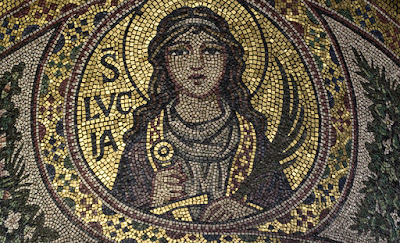 Today we remember and give thanks for the life and witness of St. Lucy (Lucia) of Syracuse, Sicily. She was a martyr during the reign of terror unleashed by the Emperor Diocletian during the year AD 303-4 (one of countless many)—the worst of the ancient Roman persecutions.

Her story had a great attraction and poignancy to the early Christians in the Western Roman Empire. Daughter of noble pagan citizens, she had become a Christian and dedicated her life to Christ, seeking to distribute her sizeable dowry to the poor rather than marry. This illustrates well the direct connection authentic Christianity has with generosity and sacrificial compassion for those in need.

Lucia’s mother Eutychia—now a widow—wanted her daughter to follow the expected course for a woman in Roman society: to marry, have children, and run the domestic side of family life. This was the only real social security most women of that time could have. Lucia had other plans. She wanted to remain a virgin, consecrating (setting apart) her life for Christ’s work exclusively. He would be her suitor and husband, and no other.

Virginity is seen in our society as a kind of tragedy once a person gets beyond a certain point. In an updated version of the past. we see sexual experience and identity as the sine qua non of a meaningful life, the secular equivalent to a sacrament. Lucia saw it otherwise. If sexuality is a gift given by God, then a very profound form of gratitude for that gift is to offer it back to God for his redemptive purposes, opening up the gift of the self beyond the limitations and possessiveness of sexual or romantic relationships and making holy that which is often commodified. And this is what Lucia did.

This gift of celibacy as an offering of love was in Lucia’s time—as in ours—a controversial and disturbing notion to the culture around her. It suggested a reversal of norms, a prioritizing of spiritual things above the physical world, a denial of sexuality as having ultimate significance, and (in her case) a clear stepping outside of cultural controls on women and children. It was a threat that could not be tolerated.

Even though her mother did not desire to hurt her daughter, the man Eutychia had promised her daughter to in marriage did. He denounced Lucia to the local Roman governor and that governor demanded Lucia commit the ultimate sacrilege for a Christian: to worship anyone other than God by burning incense (and act of worship) before and image of the Emperor. When Lucy refused, the full weight of the Roman legal apparatus fell on her; after a series of attempts she was executed by the sword, like St. Paul.

St. Lucia, whose name means “light,” immediately gained great acclaim in the western Mediterranean. Her name was added to the official list of martyrs in Rome and her witness has travelled to the far reaches of Christendom (even becoming a celebrated figure in Sweden, with elaborate traditions to observe the day). In dark places, the light of love and faithfulness she exhibited has long made an impression.

Her story has an added significance today, when the long-term impact of the Gospel’s insistence that men and women are not simply property or the sum of the various “tags” used to describe them in any culture or era: we are all unique children of God and given gifts and a calling by God to live out the Good News of Christ, often in ways challenging the norms and preoccupations of the day.

After so many centuries it might be tempting to relegate St. Lucy (as she is known in English-speaking countries) to the museum of ancient-but-not-very-relevant figures; but that would be wrong. In our sex- and gender-objectifying era we need to celebrate the witness of this courageous young woman who shows the Light of Christ in the world’s dark places—and attitudes—today, and to honor that witness by helping those who suffer such trials to live that Christ’s freedom now.

Collect for the Feast of St. Lucy

Almighty and everlasting God, who kindled the flame of your love in the heart of your holy martyr Lucy: Grant to us, your humble servants, a like faith and power of love, that we who rejoice in her triumph may profit by her example; through Jesus Christ our Lord, who lives and reigns with you and the Holy Spirit, one God, for ever and ever. Amen.
Posted by Brandon Filbert at 12:20 PM