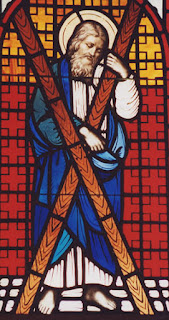 May Andrew, gentlest of the saintly company
Inspire forgiveness for our grievous trespasses
That we, sore burdened by offences manifold
At his petition may obtain deliverance

(Verse from a hymn on St. Andrew’s Day)

Almighty God, who hast given such grace to thine Apostle Saint Andrew, that he counted the sharp and painful death of the cross to be an high honour and a great glory; grant us to take and esteem all troubles and adversities which shall come to us for thy sake, as things profitable for us toward the obtaining of everlasting life. Through Jesus Christ thy Son our Lord, Who liveth and reigneth with thee, in the unity of the Holy Ghost, ever one God, world without end. Amen.

(The Collect for the Feast of St. Andrew, Apostle, in the 1549 Book of Common Prayer)

November 30th is the Feast of St. Andrew “the first-called,” as recorded in the Gospel according to St. John. St. Andrew is my “ordination patron,” since I was ordained to the sacred priesthood on this day in 1993. In addition to seeking his prayers as a companion on the journey, I have thought a great deal about my patron over the years, learning more about his particular ministry and gifts—both from the Holy Scriptures and subsequent pious tradition.

Perhaps known best as St. Peter’s brother, the Fourth Gospel records Andrew as having first been a disciple of John the Baptist before becoming acquainted with Jesus and eventually following him (and in turn inviting his brother Peter to meet Jesus). From this we can tell he had keen spiritual thirst and insight. Andrew listened so deeply to John’s message that he knew John was not the Messiah, recognizing (as others couldn't, it appears) John’s mission of preparing the way for the Messiah.

I keep this aspect of St. Andrew’s witness in mind as I go about pastoral ministry. It is so easy to become wrapped up in personalities or issues that I can miss the true message. When younger, I sometimes became quite wedded to a particular figure or movement in the Church without recognizing how such passions and loyalties can take my attention and focus from following Christ and his gospel. It is surprisingly—and sadly—easy to substitute another “gospel” for the one our Lord taught. Andrew’s witness challenges this.

Another aspect of this Apostle which intrigues and guides me is his name. Andrew’s name in Greek means “manly,” or “valorous.” The fact he bore a Greek name rather than a Hebrew one (as did his brother Simon) suggests a family background operating more in the midst of the complex cultural currents of his time and place rather than in the backwaters or safe eddies of religious traditionalism. This also has a message for me.

It is sometimes tempting for a person with my temperament to desire peace so much as to want to “climb back into the womb” (to borrow a phrase from Nicodemas) of religious purity and custom. This is not real discipleship or authentic Christianity—but an immature and selfish impulse to avoid the implications of following Christ. To show real maturity, true spiritual valor, we must be so deeply-grounded in Christ’s mind that we may follow wherever He leads without fear or complaint. It means being willing to take risks while not losing connection with the life-giving source of faith, vision, hope, and wisdom. This is the proper place of holy tradition.

This leads me to a final point of consideration: Andrew’s courageous and yet gentle nature. Tradition holds that Andrew was martyred on a cross, much like his brother Peter. These first disciples identified so deeply with Christ Jesus they were to die in a like manner as did he—emphasizing that the Christian life is not an escape from suffering but an encounter with it in Christ’s power and love, identifying more with Christ through them.

This, in turn, leads to loving others more openly and speaking the truth in love. Andrew invited his brother Peter to meet Jesus: he didn't force or hector or shame him. The difference is at the heart of the Christianity I know and desire. Relinquishing the outcomes to Christ is a necessary part of surrendering to God--as step requiring humility and inner communion with the Lord.

I am thankful for having the “first-called” Apostle as my ordination patron. His witness inspires me in the sometimes difficult and tumultuous times in which we live to listen deeply, follow simply, and love courageously. While I am only a beginner in this journey, today I rejoice in the witness of a disciple who has left a record of “things profitable for us toward the obtaining of everlasting life” in his actions, words, and character. By God’s grace may it be so for us all.

Posted by Brandon Filbert at 9:47 AM

Email ThisBlogThis!Share to TwitterShare to FacebookShare to Pinterest
Labels: Christian Life, Journey into Parsonhood, Through the Church Year