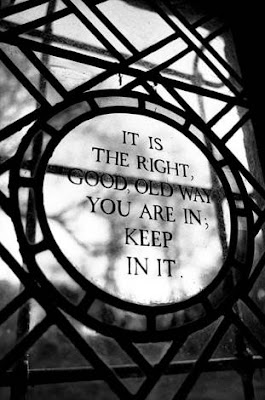 In the small church of St. John’s in the village of Little Gidding in rural Cambridgeshire, England, there is a window, on which are written the last words of Nicholas Ferrar, commemorated today in the Church's calendar. Ferrar was the founder of a small religious community in England in the early 17th century; a kind of experiment in Christian community life made up of his family and some of his relatives. They lived frugally, structured their day and year in accordance with the Book of Common Prayer’s services and pattern for living, taught the children in the area to read and write, visited the sick, and had a scriptorium in which various books we assembled for educational or spiritual purposes. A place favored by King Charles I, the community was broken up by the Puritans during the English Civil War (c. 1640-49). Yet this brief chapter in Anglican history has had, and continues to have, a remarkable impact on our ideals.

For those who know of it (chiefly through T.S. Elliot’s poem “Little Gidding” from the Four Quartets), the story of Little Gidding is often seen as a romanticized dream: a kind of Little House on he Prairie meets The Mitford books picture of being Anglican. Yet the day-to-day reality in that community, when viewed carefully, suggests a life remarkably familiar to us…one of responsibilities to others, the need to get chores done, the unexpected intruding on plans made…with one significant exception: it was a life founded on, and steeped in prayer. Prayerful communion with God was THE priority.

Just saying that sounds remarkably naïve and impractical in our day. How can one possibly base a modern American life on prayer? Isn’t that a luxury? Isn’t exercise, or medication, or even denial more effective? How can we commodify “prayer?” How can something so elusive fit into our "lifestyle?"

Perhaps the answer is simple: we cannot fit prayer into the modern American way of life. We cannot make prayer into a kind of pill we swallow in the morning and then forget about till the next day. Prayer does not cost anything, so it cannot be considered of value in a society that judges most things by their price. In other words, to be a truly prayerful person is to be at odds with our society as it is.

Yet this is true about all aspects of Christian discipleship. No matter how each era and each culture try to domesticate it, the Gospel and the life Jesus sets out for those who would follow Him is so demanding, so difficult, that it is only possible through a radical dependence on God. Usually, good health and favorable circumstances allow us to think we are quiet capable to living on our own terms. But, when our fragility is exposed by trials or loss, we find out just how vulnerable we are. The Christian is called to live in a state of continual dependence on God’s grace. This is the message of the Beatitudes, and a major focus of the Church Year (especially Lent). Our various sins all spring from a fundamental sin: the choice to live apart from God’s will, God’s purpose and love.

Nicholas Ferrar had been a rich man before he founded the community at Little Gidding. He had been a director of the Virginia Company (an early version of today’s multi-national corporations), and had become aware of various abuses in the company and its governance. He helped expose those abuses (one of the first "corporate whistle-blowers"), and after the investigation and dissolution of the company, he decided that the life he had led was no longer of deep meaning to him. He radically simplified his life, took deacon’s orders, and immersed himself in the “right, good, old way” of living found in the Gospels and taught by the Christian Church (in all of its imperfection) since the Apostles. He gave himself to prayer, works of mercy, and a counter-cultural way – yes, even then! – of simple Christian living. To those who would come after him, he had only one piece of advice about this prayer-soaked, Gospel-imbued, Prayer Book-based life: “keep in it.” Much has changed since Blessed Nicholas Ferrar’s time; but the challenge and the key to discipleship remain the same. We have the same tools: the Scriptures, the Sacraments, the Offices in the Prayer Book, silent prayer and contemplation, and the various other tools developed by Christians to carry a conscious sense of God’s presence into each part of their life. When truly lived, they are more radical than any ideology or "-ism."

Living a prayerful life will open our eyes, as it did Nicholas Ferrar’s, to the very real needs in the world around us. We will see with Christ’s eyes (“that awake, we may watch with Christ” from Compline), and will feel a profound tug to be involved in ministering the Gospel. While St. Timothy’s has many limitations, we are a place that teaches the life and art of prayer; let us "keep in it," so that we might see with Christ's eyes and serve as His hands in these confused and troubled times.

Posted by Brandon Filbert at 8:13 AM