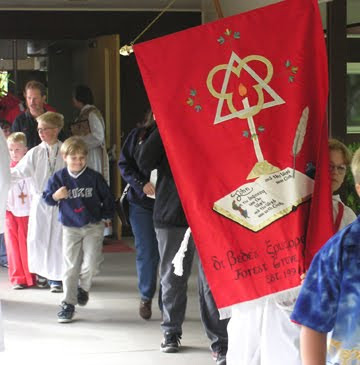 O root of Jesse, you stand as an ensign to the peoples; before you kings will shut their mouths, and nations bow in worship: Come and deliver us, and tarry not.

Some years ago when my wife and I were on pilgrimage to Northumberland, we had a unique privilege. At the tomb of St. Bede (patron of the mission church I then served), we held a service whereby, at the prayers of the Venerable Bede, we asked God’s blessing on the fabric used to make the Processional Banner. At that service was read the passage from Isaiah referred to by part of this evening’s Great O Antiphon: “On that day, the root of Jesse shall stand, as a signal (ensign) to the peoples: The nations shall enquire of him, and his dwelling shall be glorious.” (Isaiah: 11: 10). The direct connection between Jesse, Christ, and us was re-affirmed, as was the direct companionship between an eighth-century monk and those modern-day pilgrims gathered around his tomb.

There, in the midst of that “glorious dwelling,” the Nations – literally, the Gentiles – have bowed in worship, and at least one king (Henry VIII) had to “shut his mouth” and decided not to desecrate St. Cuthbert’s incorrupt body, nor the bones of St. Bede.

The banner made from that fabric is a conscious “ensign” of Christ’s coming to be with us, his triumph on the Cross and through the Empty Tomb, and in the lives of his saints – especially that “winsome example,” Bede.

Tonight’s antiphon was, by the time it had become a Christian liturgical offering, already seen as fulfilled. Yet, it continues to go on being fulfilled. Every time a person hears the Gospel, meets Jesus, and answers the call: “Follow me!,” each time a reconciliation with God and neighbor triumphs over human sin and alienation, whenever failed disciples pick themselves and follow Brother Lawrence-like in the steps of the “Lover of Souls” who bears the burden no one else can – each time, the ensign of God is raised up and his victory signaled.

O Root of Jesse, come to us your frail servants again!

Posted by Brandon Filbert at 5:06 PM

Email ThisBlogThis!Share to TwitterShare to FacebookShare to Pinterest
Labels: On Prayer, Through the Church Year