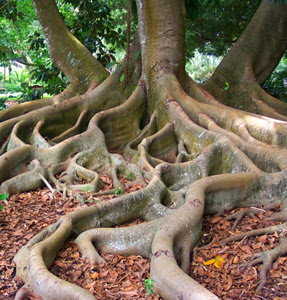 O root of Jesse, you stand as an ensign to the peoples; before you kings will shut their mouths, and nations bow in worship: Come and deliver us, and tarry not.
The “O Antiphon” associated with tonight speaks about roots and rootedness—a faith coming from someplace real and verifiable, not just mythological. This matter of roots is of real interest to me as an American. I live in a nation built on severing roots, cutting ties, and “moving on.” In fact, such is the obsession with being rootless that when we can endure this condition no more, we gorge ourselves on the most trivial forms of nostalgia in order to create a brief, collective feeling of being “rooted” in an imagined past. Just walk into any 1950’s-themed diner, and you will know what I mean.
The roots of our faith are not about nostalgia… at least they shouldn’t be about that. Our roots are about a deep, biological connection with a community of faith over time, going back to the origins of its identity, and commemorating the successive encounters—still ongoing—with God along the way. Those encounters are never an invitation to worship the past: they are an insistent call to find (and be found by) God in the present through worship, study, service, and an intentional consciousness investing every action, every choice, every encounter with its true identity—an encounter with the fullness of our being and the divine presence. Only in this way does our faith become something other than a static “idea.” It becomes an ensign, as the antiphon puts it, a sign of God’s claim on us and on the Creation he formed in Love.
Posted by Brandon Filbert at 10:46 PM