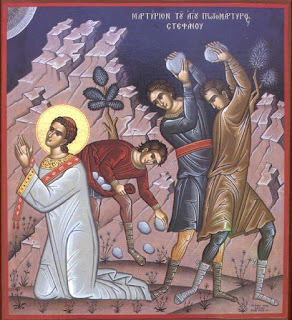 We give you thanks, O Lord of glory, for the example of the first martyr Stephen, who looked up to heaven and prayed for his persecutors to your Son Jesus Christ, who stands at your right hand; where he lives and reigns with you and the Holy Spirit, one God, in glory everlasting.  Amen.
The Collect for St. Stephen's Day

I suspect one of the bigger disappointments for many in the Church—and perhaps especially for those outside of it—is the persistence of conflict in Christ's Body. There is something in us that knows such conflict is fundamentally wrong. While we are resigned it to in most dimensions of life, there is rightly a sense that in matters of faith such resort to argument, bitterness, and (particularly) violence is a sign of tremendous failure. The justification for much conflict in the Church is similarly wrong: “that’s just the way it is,” or some version of “conflict is the only way to sort the true believers from the false ones.” This has all the wisdom of the Vietnam-era saying “to save the village, we must destroy the village.” Conflict does so much damage within communities of faith that, when all is said and done, it is hard to see what the benefits really were.

This is particularly true when conflict moves from a simple difference of opinion to enmity. It takes very little to go from vilifying an idea to vilifying a person. Once it "gets personal," the cycle of conflict moves with a seemingly inexorable logic. The story of St. Stephen's death at the hands of religious opponents provides one of the most clear-cut examinations of this sorry state of affairs. It also provides us a way through it.
Conflict does continue to happen, and Christians must have a response. When it comes to the personal dimension of conflict, that response must of necessity be the one Jesus taught: pray for those who persecute you. This completely counter-cultural phenomenon in the Gospel is rather like the landing craft in an amphibious assault. It is the way a beachhead for peace is established on earth.
Christ’s life was a living prayer. His birth at Christmas was the beginning of his prayer to the Father for a divided and broken humanity. He taught those who would follow him to do the same. For us it is always essential, whenever conflict sets in, to make clear that whatever the wrong we may confront, we do not do so with the notion that we ourselves, or an ideology or a program we carry, are the solution. The solution is to become part of Christ’s eternal prayer to the Father.
This is what St. Stephen became in his martyrdom. He was no hate-filled terrorist, no ideological prig needing to bring on a riot to settle scores or accomplish his plan for revolution. His conflict with the Sanhedrin was not “his” conflict: it was the Sanhedrin’s conflict with truth itself. Stephen held a mirror up to them, confronting them with what they had become. Their response to was take down the mirror, to kill Stephen. The sign that this was so was his response. He asked forgiveness for those killing him. For Stephen, it was always clear that he was only the mirror, not the light itself. For him, the battle was already over, and had been so since Christ had brought his perfected humanity to his Father’s throne in the Ascension and presented it to him in his unique, completely selfless victory.
Conflicts are not a fact of the human condition: they are the result of an ongoing choice of humanity. By choosing to make the conflict “ours,” we continue the apparently “natural” cycle of alienation, violence, and retribution. St. Stephen, whom we have remembered and honored today, shows us this supposed inevitability may be challenged and overturned by opening up our life so completely to Christ’s life that his grace, his prayer, his justice, his victory becomes ours.
Posted by Brandon Filbert at 8:34 PM