On the Feast of Sts. Philip and James: One, Holy, Catholic, and Apostolic 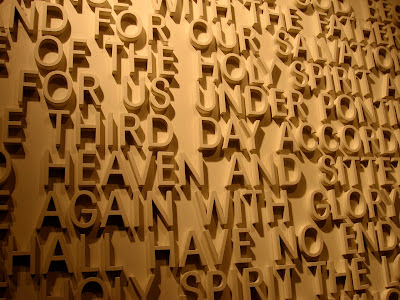 Below is a portion of a work by Tertullian (c. 160 – d. 259). As one reads it, the centrality of direct continuity between contemporary Christians and their Apostolic roots is made clear.

From time to time in the Church, there are forces and movements that reject the significance of such continuity. Such movements tend to use millenarian language, suggesting that a particular era is uniquely able to see things truly or correctly. If followed, this impulse leads spiritually to eccentricity and (eventually) a dead end. We may try to ignore this, but such efforts always lead to the same dismal results.

The “four marks of the Church” are found in the Nicene Creed: One, Holy, Catholic, and Apostolic. As we begin the commemoration of Saints Philip and James, it is a good time to remember that, whatever the issue, these marks are unalterable signs of the fullness of faith…not quaint relics or outgrown identities.


The same faith that motivated Tertullian to write with such conviction is what will inspire Christians to live and witness to the Gospel in our own day. Disconnection from Apostolic continuity always results in division and obsessions. Only the Apostolic Faith, and not what some have wanted to add or remove from it, will communicate the Gospel in its simplicity and fullness. Thankfully, Classic Anglicanism has always sought to do and be just that.

Our Lord Jesus Christ himself declared what he was, what he had been, how he was carrying out his Father’s will, what obligations he demanded of men. This he did during his earthly life, either publicly to the crowds or private to his disciples. Twelve of these he picked out to be his special companions, appointed to teach the nations.

One of them fell from his place. The remaining eleven were commanded by Christ, as he was leaving the earth to return to the Father after his resurrection, to go and teach the nations and to baptize them into the Father, the Son and the Holy Spirit.

The apostles cast lots and added Matthias to their number, in place of Judas, as the twelfth apostle. The authority for this action is to be found in a prophetic psalm of David. After receiving the power of the Holy Spirit which had been promised to them, so that they could work miracles and proclaim the truth, they first bore witness to their faith in Jesus Christ and established churches throughout Judea. They then went out into the whole world and proclaimed tothe nations the same doctrinal faith.

They set up churches in every city. Other churches received from them a living transplant of faith and the seed of doctrine, and through this daily process of transplanting they became churches. They therefore qualify as apostolic churches by being the offspring of churches that are apostolic.

Every family has to be traced back to its origins. That is why we can say that all these great churches constitute that one original Church of the apostles; for it is from them that they all come. They are all primitive, all apostolic, because they are all one. They bear witness to this unity by the peace in which they all live, the brotherhood which is their name, the fellowship to which they are pledged. The principle on which these associations are based is common tradition by which they share the same sacramental bond.

The only way in which we can prove what the apostles taught – that is to say, what Christ revealed to them – is through those same churches. They were founded by the apostles themselves, who first preached to them by what is called the living voice and later by means of letters.

The Lord had said clearly in former times: I have many more things to tell you, but you cannot endure them now. But he went on to say: When the Spirit of truth comes, he will lead you into the whole truth. Thus Christ shows us that the apostles had full knowledge of the truth, for he had promised that they would receive the whole truth through the Spirit of truth. His promise was certainly fulfilled, since the Acts of the Apostles prove that the Holy Spirit came down on them.
From On the Prescription of Heretics

The Collect for the Commemoration of Saint Philip and Saint James, Apostles
Almighty God, who gave to your apostles Philip and James grace and strength to bear witness to the truth: Grant that we, being mindful of their victory of faith, may glorify in life and death the Name of our Lord Jesus Christ; who lives and reigns with you and the Holy Spirit, one God, now and for ever.  Amen.

Posted by Brandon Filbert at 5:28 PM