John Henry Hobart: A Leader for Then and Now 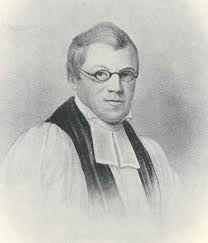 Today is our annual observance of the life and witness of John Henry Hobart, Third Bishop of the Diocese of New York, and one of the seminal figures in the Episcopal Church’s early history.

Part of Hobart’s significance is that he was willing to invest the time, energy, and creativity to take a struggling, demoralized, and lukewarm faith tradition from complacency to mission. Many of the clergy he inherited were not particularly well-trained; the priorities of the Episcopal Church had been for a long time mere survival and compromise. The nascent Episcopal Church simply didn’t have a transformative vision. Hobart had that vision

Into the miasma of early nineteenth-century Episcopalianism came the thoughtful, energetic, and zealously Christian Hobart. In the face of sometimes determined opposition, he recalled the Episcopal Church to its authentic identity, as found in the Bible, the Book of Common Prayer, and the Early Church. He labored to bring forth an Anglicanism for America that was both firmly rooted in a deep reading of the Scriptures as well as responding to the mission challenges of his time. Under his leadership, God blessed the Episcopal Church and it grew. With a renewed and sound sense of its identity, it presented an alternative to—and not a participation in—the spiritual distortions of the day. We would do well to study this in our own era.

Hobart did all this because of an inner experience of Christ as Risen Lord and Savior. His writings (particularly his sermons) make this clear. His was a rich and inspiring witness for the power of the Gospel to renew the world, derived not from superficial techniques or ideological fixation, but a regular prayer life, participation in the sacraments, and exposure to the true mission of the Church to proclaim the Kingdom of God, not the spirit of the times. “Evangelical Truth and Apostolic Order” was his watchword, and by adhering firmly to it, he had the solid foundations, clear plan, and energy to take up his mission to help renew a weakened and listless church. May that same renewal shake us in our day.

Collect for the Commemoration of John Henry Hobart

Revive your Church, Lord God of hosts, whenever it falls into complacency and sloth, by raising up devoted leaders like your servant John Henry Hobart whom we remember today; and grant that their faith and vigor of mind may awaken your people to your message and their mission; through Jesus Christ our Lord, who lives and reigns with you and the Holy Spirit, one God, for ever and ever. Amen.
Posted by Brandon Filbert at 8:58 AM

Email ThisBlogThis!Share to TwitterShare to FacebookShare to Pinterest
Labels: Church in the World, Classical Anglicanism, The Church and its Ordering, Through the Church Year