The Triumph and Joy of the Holy Cross 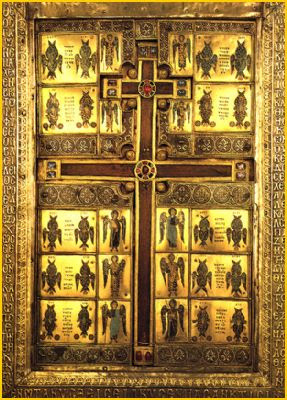 Today is the Feast of the Exaltation of the Holy Cross. It occurs almost at the opposite end of the year from Good Friday, and allows us think about the Cross in a slightly different way.

The origins of this feast are ancient, dating to the Constantinian period of Christianity--a time when the almost unbelievable had happened: the Emperor had ended the persecution of Christians and had honored Christ and his Church. It was a time of profound joy, hope, and energy in the Church. For those Christians who continue to live in close relationship with this Patristic Christianity, that joy, hope, and energy continues to be available and to inspire.

This day represents the Church’s early understanding of the Cross as a trophy, an ensign of victory. The unrepeatable sufferings of Christ on the Cross were the means by which God gained the victory over the forces of sin and death. The concept of “exaltation,” which seems difficult for some modern Christians to understand when applied to the Cross, is completely natural for those who have come to see the Cross as it is spoken of in the Gospel according to St. John: the throne of Christ’s glorification.

The following portion of an 8th century sermon by St. Andrew of Crete on this feast day may help those who are new to this understanding of the Cross to appreciate its depth and power. St. Andrew alludes to a number of other dimensions of the Cross’s significance (there is no “one” definition of the Atonement, after all—it is a holy mystery beyond full understanding), but he makes clear that today celebrates the Divine Victory of Christ on the Cross.

We are celebrating the feast of the Cross which drove away darkness and brought in the light. As we keep this feast, we are lifted up with the crucified Christ, leaving behind us earth and sin so that we may gain the things above. So great and outstanding a possession is the cross that he who wins it has won a treasure. Rightly could I call this treasure the fairest of all fair things and the costliest, in fact as well as in name, for on it and through it and for its sake the riches of salvation that had been lost were restored to us.

Therefore, the cross is something wonderfully great and honorable. It is great because through the cross the many noble acts of Christ found their consummation - very many indeed, for both his miracles and his sufferings were fully rewarded with victory. The cross is honorable because it is both the sign of God’s suffering and the trophy of his victory. It stands for his suffering because on it he freely suffered unto death. But it is also his trophy because it was the means by which the devil was wounded and death conquered; the barred gates of hell were smashed, and the cross became the one common salvation of the whole world.

The cross is called Christ’s glory; it is saluted as his triumph. We recognize it as the cup he longed to drink and the climax of the sufferings he endured for our sake. As to the cross being Christ’s glory, listen to his words: Now is the Son of Man glorified, and in him God is glorified, and God will glorify him at once. And again: Father, glorify me with the glory I had with you before the world came to be. And once more: “Father, glorify your name”. Then a voice came from heaven: “I have glorified it and will glorify it again”. Here he speaks of the glory that would accrue to him through the cross. And if you would understand that the cross is Christ’s triumph, hear what he himself also said: When I am lifted up, then I will draw all men to myself. Now you can see that the cross is Christ’s glory and triumph.

Collect for the Feast of the Holy Cross
Almighty God, whose Son our Savior Jesus Christ was lifted high upon the cross that he might draw the whole world to himself: Mercifully grant that we, who glory in the mystery of our redemption, may have grace to take up our cross and follow him; who lives and reigns with you and the Holy Spirit, one God, in glory everlasting. Amen.
Posted by Brandon Filbert at 3:16 PM