Of Angels and Mortals: Michaelmas 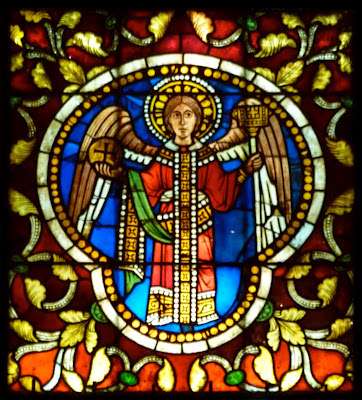 The 29th of September is a Holy Day of particular significance to Anglican Christians. It is the annual celebration of the ministry of angels in the personal and common Christian life. This feast day is official named "St. Michael and All Angels," but is often referred to in the English tradition as Michaelmas (the Mass of St. Michael the Archangel, and by extension, all the angels).

In addition to those Archangels whose names Scripture shares with (Michael, Gabriel, Raphael), we are told that each of us has an angel given to us individually—a sort of "behind-the-scenes" friend—who is both guide and guardian. No attempt is made in Holy Scripture to go much deeper into this relationship; St. Paul cautions us about taking this very secondary relationship and turning into something greater than the primary relationship with God the Holy Trinity. The importance of this day is not lodged in some sort of Christian “magic,” but in the mystery of God’s workings in us and in the whole of Creation. 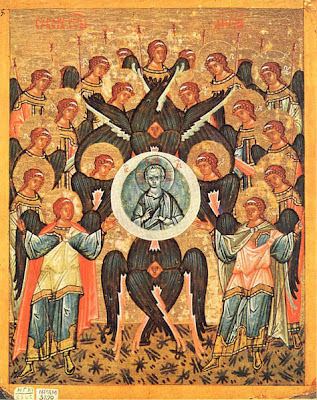 The Prayer Book Collects often give us a succinct statement about what we believe and how to live that belief out. The collect for St. Michael and All Angels does this beautifully:

Everlasting God, you have ordained and constituted in a wonderful order the ministries of angels and mortals: Mercifully grant that, as your holy angels always serve and worship you in heaven, so by your appointment they may help and defend us here on earth; through Jesus Christ our Lord, who lives and reigns with you and the Holy Spirit, one God, for ever and ever.  Amen.

Created versus Everlasting
First of all, we are told that God is everlasting, whereas all else is the result of God’s creative love—including the Angels. Like us, they are an order of creation, not beings who have always been there. Some traditions in Christianity keep Mondays, and others Tuesday, as the day of the week commemorating the creation of the angels (with special prayers to be offered).

Ordained and Constituted
Then, we are told the divinely-appointed order of angels and mortals exists by the command and plan of God. Here we are reminded all orders of Creation are meant to work together harmoniously. God has constituted (created as part of a whole, made equivalent) this relationship between beings with the capacity to choose, will, and decide. It is not by chance or happenstance. God'a actions make the Creation to be complete, not as the result of whim or caprice. Once established, each part of this divinely-established order forms the beauty of the Creation. In living as we were meant, angels and mortals glorify God and beautify the Creation just as planets, stars, and comets beautify the night sky.

A Wonderful Order
The collect tells us that this divinely-constituted order of humans and angels is wonderful in its original sense: full of wonder. It is a joy to behold, a mystery to contemplate—not a specimen to be boxed up and filed under “Interesting Spiritual Tidbits.” Just as modern science unfolds greater and greater mystery before us (each new discovery pointing to things more and more beyond our comprehension), the order of mortals and angels points us to the fantastic interconnection between the infinite of God and finite of Creation. To think of the angels is an active work of contemplation: considering things glorious and inspiring rather than yet more “data” in order to produce a clearly-defined but very simplistic “product." Ancient Christianity understood such contemplation as essential to a truly Christian attitude and life. Modern American Christianity struggles to incorporate wonder into its prayer and practice.

In Service and Worship
At each Holy Eucharist, we sing or say the angelic hymn of Isaiah’s vision of God in the Temple: “Holy, holy, holy Lord, God of power and might, heaven and earth are full of your glory.” We do this because it is the destiny and perfection of all Creation to share in the joy of God’s presence through worship. The Eucharist is always a direct participation in this heavenly worship, recalling us to our true dignity and purpose. This sets the pattern for our earthly service, in which we continually recall God through mental prayer and works of mercy. Just as the angels in heaven always serve and worship, so may we in our lives of ministry.

To Help and Defend
The holy angels are not personal “servants,” but are helpers and defenders. They come to us with a message (the Hebrew word for angel means “messenger”), not as bodiless doormats. In a sense, the Golden Rule applies to our relationship with them, as well. That relationship is one of partnership, not of servitude or conjuring. The angels bear God’s message to us, whether that message be for our direction, safety, encouragement, or our call to witness to the Gospel in decisive and costly ways.

By God’s Appointment
We must remember, however, that the message the angels bear is always God’s message. Like us, the Good News the angelic order bears is never its own. This is why angels are not, for orthodox Christians, a mere tool to escape from tricky situations. Like us, they are ministers of God's work. Ministers are never to be the point themselves: they are to point to God. The message they--and we--share in must run through us, permeating our lives,  announcing the Gospel in word and deed.

Taken as a whole, the collect for the Feast of All the Angels is a solemn reminder that all Creation has an underlying unity of purpose and role to play in the great drama of the Triumph of God’s Love. Some roles are very public; others are very much more hidden: all are essential in the mystery of salvation.

Thank God as you rejoice in the ministry of angels and mortals this Michaelmas—and remember that all of us in our various ways are to be messengers of the Gospel. 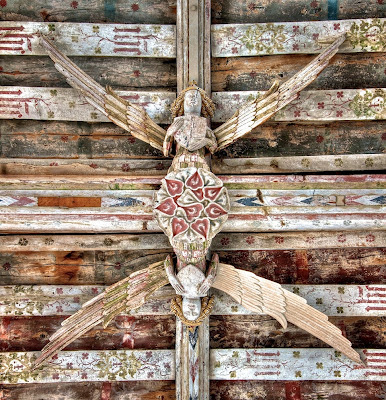 Antiphon on Magnificat for the Second Evensong of Michaelmas:
"In the presence of the angels, I will sing your praise, O Lord."
Posted by Brandon Filbert at 4:09 PM